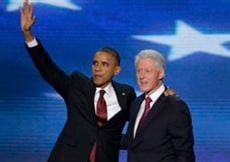 I want Bill Clinton to talk about me at the Democratic National Convention.

Say what you will, but the man is a masterful public speaker.  He has an absolutely incredible way of talking to an entire convention center (or an entire nation) and making it seem as though he’s right in your living room, sitting at the edge of your most comfortable chair.

He is articulate, passionate, and funny.  And I truly, honestly believe that he means every word he is saying when he says it.

I got a lot of flack for my opinion on BC in years past.  You see, although some of my dearest friends are Democrats and championed President Clinton for his work in the White House, many of them will not forgive him for his marital indiscretions.  Okay, affairs.  Crappy judgment. Inability to keep it in his pants.

I get it.  If you have ever been in a relationship with someone who cheated on you, there is a knee-jerk reaction when you hear about someone cheating.  And when that someone is outed for cheating publicly and they happen to be a public figure (like, say, the President of the United States), it is hard to think about trusting that person again.

I understand on an entirely different level, too.  You see, my father, while he spent most of his life identifying as a Republican, was a lot like Bill Clinton.  Charismatic, persuasive, logical.  Passionate, gregarious, funny.  People really liked my father -or they hated him, there weren’t many who were lukewarm – and most saw him as a strong leader.  He was also a cheater. And even though he was my father and not my husband, I vilified him for a long time because of that, unable to see the other parts of him.

With Clinton, I have the luxury of being able to see beyond his sexual indiscretions and hoping that he has learned a great deal from them.  I am not a friend or family member, not someone who was directly affected by those errors in judgment.  I am able to look to his record of service, his work done on behalf of social justice and continued efforts as a retired President, and see the bulk of his message.  I listened to his speech at the DNC last night and was mesmerized by his ability to switch from levity to sincerity, all the while feeling as though he was speaking to a much more intimate group than the billions of people likely watching on television.  I was struck by his passion and clarity and proud to know that he represents many of the ideals that are important to me.  I know that he has probably spent many thousands of hours being coached on public speaking and that he didn’t likely write the speech he delivered.  None of that dampened my enthusiasm for his message, though, and here’s why.  Because I think that the “X-factor” in his speech that kept it from being flat or cynical is that he truly believes what he is saying. That he honestly puts his faith in Barack Obama to do the things he says he will.  That the choice to stand up and throw his hat in the ring with the President is not one of loyalty to the Democratic party, but a sincere belief in him as a person and his ability to affect the lives of those who need it most.  Perhaps my favorite moments in his speech came when he talked about community and cooperation.

“President Obama’s approach embodies the values, the ideas, and the direction America has to take to build a 21st-century version of the American dream, a nation of shared opportunities, shared responsibilities, shared prosperity, a shared sense of community.”

“…if you want a country of shared opportunities and shared responsibility, a we’re-all-in-this-together society, you should vote for Barack Obama and Joe Biden.”

It is his ability to rouse a crowd to passion, empathize with them and tell a damn good story that makes Bill Clinton such a dynamic speaker.  And while all of those things are important, it is ultimately my honest assessment that he means what he says that is the tipping point for me.