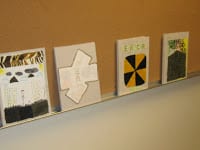 At Eve’s school, they have Culmination ceremonies instead of mid-terms or finals. The purpose of these gatherings is to demonstrate their proficiency with the material they have been studying to their peers, teachers, and families. The school very much has a “stand and deliver” philosophy that encourages the girls to truly achieve mastery of each subject and understand it in a way that they can then teach it. The point is to ensure that they aren’t simply cramming their heads full of facts that will promptly be forgotten once they lay their pencils down.

Last night, we went to the second such ceremony and, just as I was the first time, I was struck speechless. The theme last night was “Literary Salon.” The girls have been studying fairy tales, both modern and ancient, and their impact on culture and were tasked to create their own books, complete with illustrations. In addition, they have been talking about personal identity and were asked to create what Eve’s teacher calls a “river” poem, honoring many of the tributaries that flow into them to make each girl a whole. Finally, they have been studying music (guitar, keyboards, singing, and music theory) individually and as a group. The girls performed in groups, recited their poems individually, and read their stories aloud to the family and friends gathered in the room. Not only were they asked to memorize poems and music, they were asked to find their voices and their courage to speak publicly and showcase their talents and creativity.
The grand finale came as each and every girl in the class sat down with her guitar and they played and sang “Lean On Me.”
“Sometimes in our lives
We all have pain
We all have sorrow.
But if we are wise
We know that there’s
Always tomorrow.
Lean on me
When you’re not strong
And I’ll be your friend.
I’ll help you carry on.
For it won’t be long
‘Til I’m gonna need
Somebody to lean on.
Please swallow your pride
If I have things
You need to borrow.
For no one can fill
Those of your needs
That you don’t let show.
Lean on me
When you’re not strong
And I’ll be your friend.
I’ll help you carry on.
For it won’t be long
‘Til I’m gonna need
Somebody to lean on.
If there’s a load
You have to bear
That you can’t carry
I’m right up the road
I’ll share your load
If you just call me.
So just call on me, sister
When you need a hand.
We all need somebody to lean on.
I just might have a problem
That you’d understand.
We all need somebody to lean on.”
I was absolutely (to the intense mortification of Bubba and Lola) brought to tears. These girls, each of them so different, were really singing this song to each other. There are girls who come from broken homes, lesbian homes, girls being raised by extended family, African American girls, girls from Cambodia and those of Latina descent. There are girls on scholarship, a girl whose father was recently killed in Afghanistan, girls with learning disabilities and one who is repeating fifth grade. There is a girl adopted from China, another who has never met her birth father, and others who wish they hadn’t. There are girls who are proficient in mathematics and others who are great with music or art. There is a girl with a debilitating anxiety disorder and one whose mother recently battled breast cancer. These girls know all of these things and more about each other and yet they banded together when everyone was cleaning up last night after Culmination to ask their teacher to let them perform an impromptu song for us all. They have spent evenings together camping on the beach in the cold, wet Pacific Northwest, cooking meals together and pitching tents and holding each others’ hands and heads as they got seasick on a boat. Despite their differences, they are united in their accomplishments as young women of passion and humor, ideas and love for life that literally brought me to my knees. This is not a group that is concerned with gossip or fashion, boys or competition for the spotlight. This is a group of young women who are well on their way to finding out who they are as individuals and recognizing their strengths as a group. And I, for one, am honored to be a spectator of it all.
April 29, 2011/7 Comments/by kariodriscollwriter_fan60j
https://kariodriscollwriter.com/wp-content/uploads/2011/04/IMG_7832.jpg 150 200 kariodriscollwriter_fan60j https://kariodriscollwriter.com/wp-content/uploads/2020/08/web-logo-Kari.png kariodriscollwriter_fan60j2011-04-29 02:03:002020-08-02 18:10:11Culmination