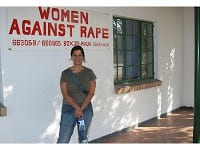 I do love NPR. In the multitude of moments when I am alone in the car, bustling between basketball practice and the grocery store or coming home from dropping a child off at school, my first act, before even putting the car into gear and pulling away from the curb, is to switch the radio from “Kid-Approved Pop Station” to my local NPR station. It is then that I can truly settle in to my seat, breathe deeply, and shift from chauffeur-mom to intelligent adult. Ahhh.

Occasionally what I hear is disturbing. Most often it is enlightening, educational and informative, but from time to time I am reminded of some of the most difficult details of life in other areas of the world. Last Thursday it was a report on the prevalence of wartime rape in parts of Africa. There are many women whose husbands have gone off to fight civil or tribal wars and are living by themselves, wholly undefended, when rival soldiers invade their villages and brutally rape them, knowing that this is a punishment more profound than death or disfigurement. For the women who have yet to be married, this effectively seals their fate, rendering them unfit for a mate for life. For those who are married, their husbands will be compelled to find another, more suitable mate upon their return home. For the women themselves, they are held in a uniquely painful place of shame for the remainder of their lives. Culturally, a woman who has been sexually violated is forever marked as filthy, used, disgusting. In many cases, these women are forced to leave their villages for fear of bringing shame on other members of their community.
Despite the knowledge that these women are entirely helpless against weapon-wielding rapists, driven by mob mentality and the knowledge that this is one situation they can find themselves in control of, it is the women that are held accountable for the despicable treatment they receive. Not ever having experienced a culture such as this, it is still not much of a reach for my imagination, knowing that so few rape victims in our “civilized” country are loathe to come forward because of shame. For those women who have been ostracized from their own families and communities and gone on to become voices of strength and power and knowledge and empowerment for other women who are suffering similar fates, I am even more impressed. Their strength and resilience and willingness to overcome the barriers in front of them is inspiring and gives me hope and somewhat of a personal mandate to help. I don’t know how yet, but I know myself well enough to recognize the seed of passion for this particular issue that has wedged itself deep inside me and will soon call for action.
*photo from financialpost.com
January 30, 2011/5 Comments/by kariodriscollwriter_fan60j
https://kariodriscollwriter.com/wp-content/uploads/2011/01/WAR.jpg 150 200 kariodriscollwriter_fan60j https://kariodriscollwriter.com/wp-content/uploads/2020/08/web-logo-Kari.png kariodriscollwriter_fan60j2011-01-30 17:59:002020-08-02 18:13:02I Feel Some Action A’Comin…