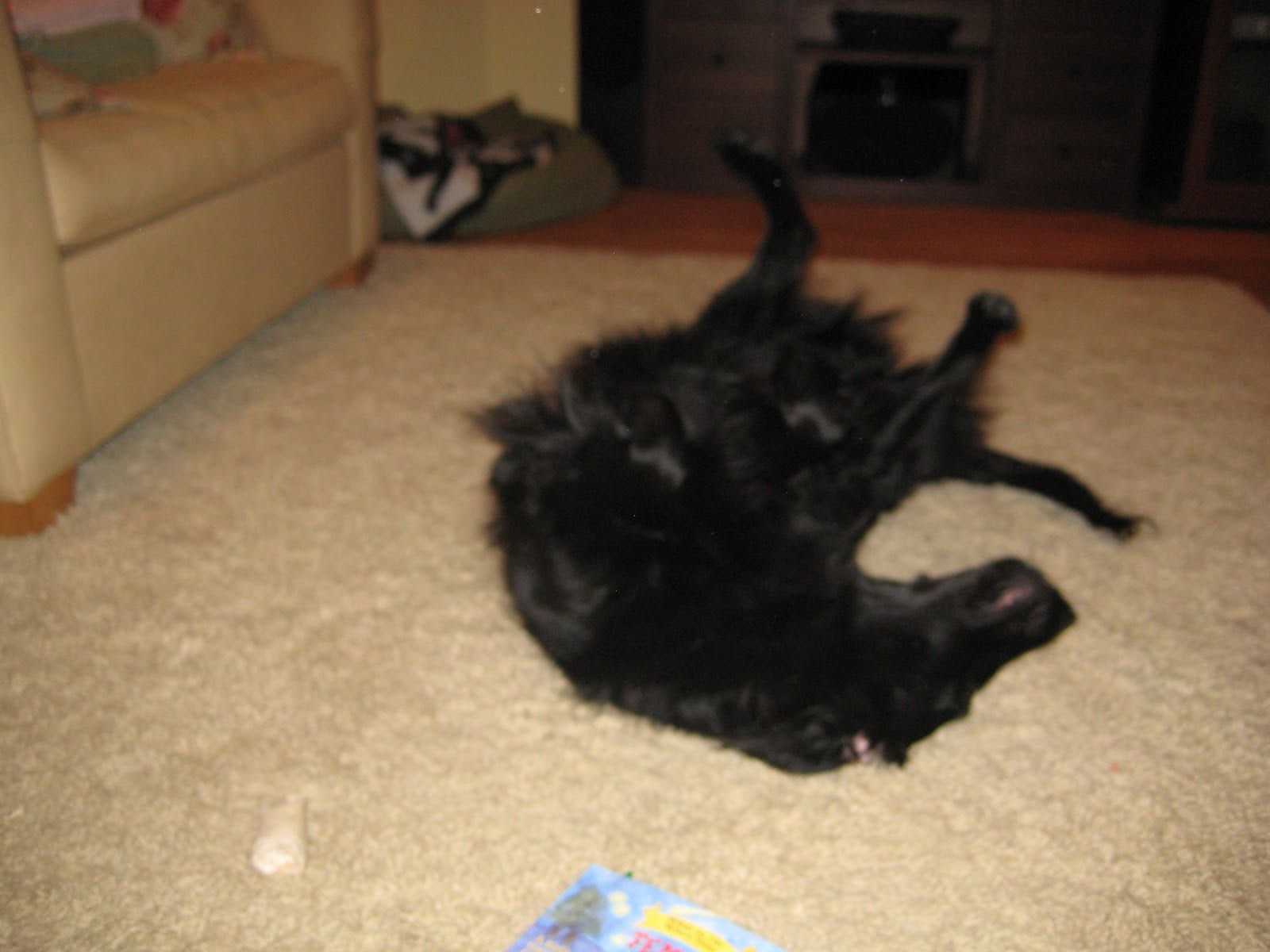 It is a freezing cold, cloudy day here in the ‘hood and I am a bit bereft because the house is too quiet.  The fireplace is on, the cat is napping on the back of the couch, the kids are at school and Bubba left before dawn’s crack for parts South and then East.  I have plenty of work to be doing, but CB, my faithful friend and (as Eloise says in those beloved children’s books) “mostly companion” is at the vet.

Saturday afternoon the girls and I took him out to throw the tennis ball for him and on the first throw, as it skittered across the solid, frozen ground whose frost has not thawed for nearly a week, CB took off running.  Despite the fact that he is nine years old with a slowly graying chin and moustache, he tucked his head and flew like a greyhound chasing a rabbit.  The third or fourth time his feet struck the ground, I saw him falter and heard a whine.  He slowed only a bit, snatched the ball up and returned limping and whimpering, a confused look on his face even as his tail swung wildly back and forth.  He refused to put any weight on the foot and my first thought was that he had stepped on something sharp that had imbedded itself in his pad.  I felt around as long as he allowed me to before pulling his trembling little paw away from me and determined there was no blood or obvious injury.  The girls and I headed home, watching the poor guy toddle along on three feet.

By Sunday he was no better and I was having to make the hard judgment of whether or not to take him to an emergency vet despite the lack of blood or obvious swelling.  CB was clearly in pain, but he is too social for his own good and couldn’t manage to stay as still as he probably ought to have.  When Bubba and I trudged up two flights of stairs to tell the girls goodnight, he followed, and then followed us back down to watch another episode of Homeland.  He lie in his bed whimpering from time to time until we were ready to go upstairs and then he hopped up with us and settled in for the night.

This morning the girls helped me lift him into the car and as soon as I dropped them at school, I headed to the veterinarian office to sit in the parking lot until 9am.  The tech showed up early and helped me get him inside, but there is no doctor in today until 1, so the best she could do was take some x-rays and keep him until then.

All morning I did things halfway.  Started cleaning out the pantry and left things scattered across the kitchen counter, unsure of what to do with them.  I sorted through bills and permission slips by the phone and made a bigger mess on the kitchen table with more piles of things that can’t be put away but can’t be taken care of today.  I walked to my appointment with the chiropractor, the air so cold my cheeks ached and stung, thinking about how much it was going to suck to come home to a house without my baby boy smiling and wagging his tail as I unlocked the door not quite fast enough for his taste.

CB has been part of the family for eight years.  He has barked fiercely when strangers come to the door, encouraged me to go outside and get some fresh air every day even when it’s the last thing I think I want to do.  He has befriended many a child and broken the ice for us during awkward moments when we meet someone new and don’t know what to say.  He has sat at my feet for countless hours as I prattle away on my computer and he always, always greets us at the door with a toy or someone’s shoe in his mouth – loathe to say hello without something tangible to offer. 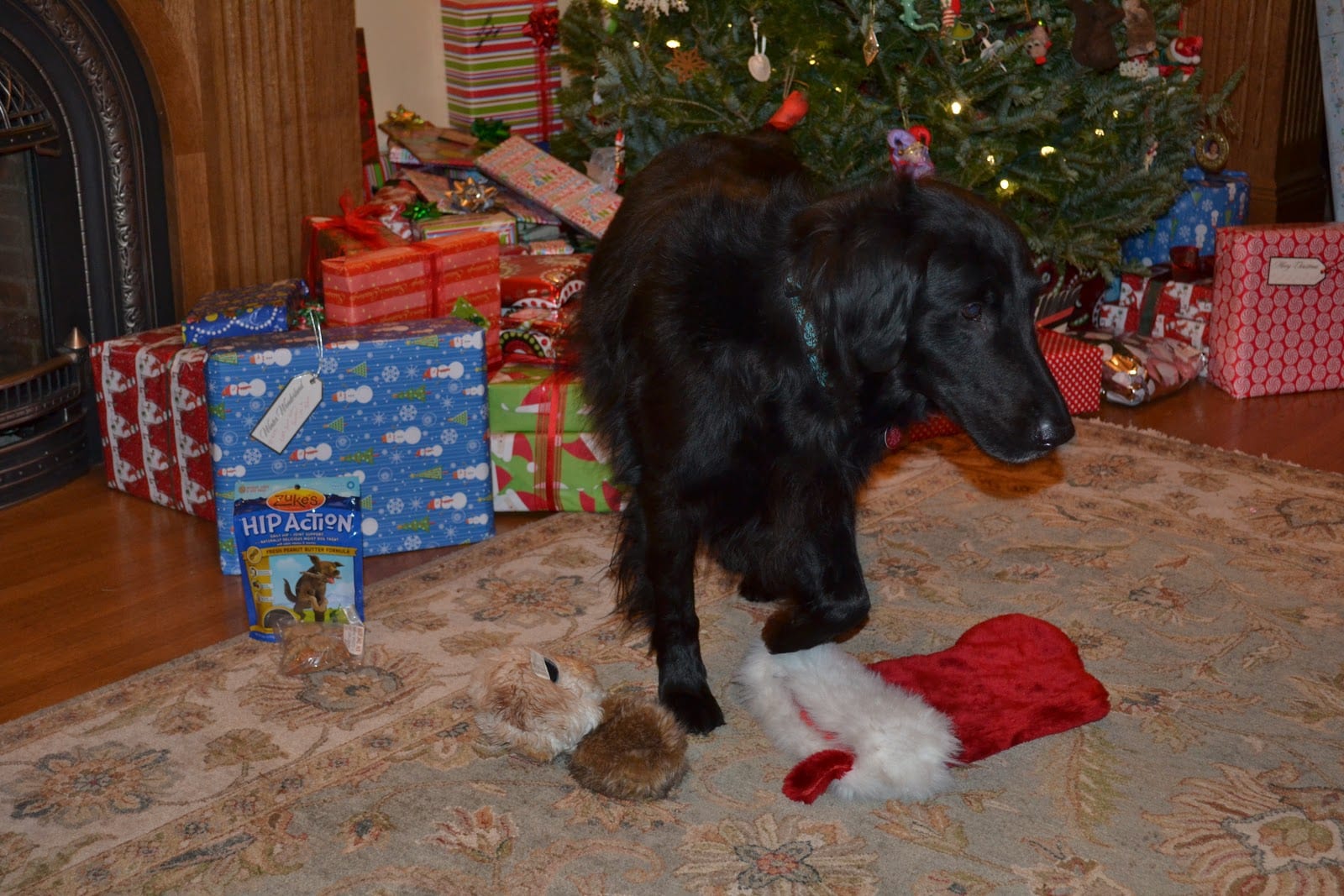 He is middle-aged and, despite the fact that I know he will likely recover from this quickly, it has given me pause to say the least.  I am very attached to this lovely boy.  To see him in physical pain yesterday nearly undid me several times over just as it would if Eve or Lola or Bubba were hurting.  I have spent nearly every single day for the last eight years being followed around by CB and I have taken for granted that he will always be there.  Often, I am annoyed that he is always there, especially when I trip over him as I am cooking dinner or when he noses his way in to the bathroom as I sit on the toilet.

When the tech took him back this morning she asked me to complete some paperwork at the front desk.  When she returned, she took the papers and told me they’d call sometime this afternoon to update me on what they discovered.  It hit me that I hadn’t rubbed his ears and said goodbye to him.  I nearly asked if I could go to the back and see him before I left but I felt silly.  It isn’t as though he’s terminally ill and I won’t see him again. He will just be there for a few hours without me.  As I climbed into the front seat of the car and caught sight of his brontosaurus-sized bone in the back, my throat welled up and my eyes were full of tears.

I don’t rightly know, except that he is my shadow. My mostly companion.  My buddy.  There is something so powerful about this connection and, after today, I hope that I never again take it for granted.