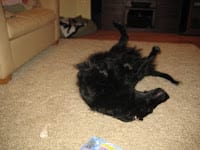 Not everyone wants to play.

Even if CB is always up for a high-speed game of chase followed by a wrestling match in the boggiest part of the grass, not every other dog we come across on our walks is as eager to play as him. He can spot another dog two blocks away and from my position behind him, I watch the tops of his floppy ears begin to flatten out, his neck straighten, the tail wagging increases to warp speed and the most pathetic whimper stutters out of his throat. I’m pretty sure it means, “Hurry, Mom! Let’s go meet that dog! Hurry up!” This is when I’m so glad I remembered to put the prong collar on him because he uses every ounce of his 80 pounds to drag me closer and closer to the other dog.
But more often than not, once we get to the other dog, they are not about to play. Either the dog’s owner has decided they are out for a walk and that’s it, or the dog is closer in size to my cat than CB and begins barking that “I’m Godzilla, don’t mess with me!” bark, or the dog is closer in size to a horse and feels the need to eat my dog to demonstrate just exactly who is in charge. Occasionally, we come across a dog and owner who are happy to meet CB on his terms, uncontrollably enthusiastic, and we have a bit of playtime before resuming our stroll. When that happens, CB is reluctant to leave and spends the first half-block looking back at his new friend, sincerely hoping they are following us and ready for another romp. But he is truly happy. Not satisfied, but happy.
When we come across another dog that doesn’t want to play, CB cocks his head in that questioning way all dogs have and looks at me as if to say, “Doesn’t that dog know he’s a dog? Doesn’t he know playing is what we do?”
He’s right, you know, but it’s not for us to pass judgement. Some want to play. Some are in the mood to play but circumstances prevent it. Some aren’t in the space to understand play. Some are frightened or intimidated or just don’t get it. But some do play and when they do, it is wholehearted and enjoyable and fulfilling. And CB is grateful. And then he comes home and has a drink and takes a nap. Today, I’m taking my cues from him. I’ll be on the lookout for people who want to play, but if they don’t or can’t, that’s okay. I’ll just smile and move on. And when I find someone to engage with, I’ll do it 100% until I’m done and then I’ll get a drink and relax.
January 8, 2011/4 Comments/by kariodriscollwriter_fan60j
https://kariodriscollwriter.com/wp-content/uploads/2011/01/IMG_5641.jpg 150 200 kariodriscollwriter_fan60j https://kariodriscollwriter.com/wp-content/uploads/2020/08/web-logo-Kari.png kariodriscollwriter_fan60j2011-01-08 20:55:002020-08-02 18:13:39A Reminder From the Dog…