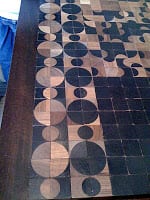 There are so many milestones in life that we take for granted after they’ve come and gone. Those acts that we wait for, sometimes prepare for hour after hour, and once they are performed, there is no going back.

Driving.
Passing a momentous exam.
Having sex for the first time.
There are others that are not quite so enormous, but still have an impact. Getting your first cell phone or laptop. Your first library card.
Bubba and I are holding out on Eve. Despite her carefully calculated attempts to convince us otherwise, she is not getting a cell phone anytime soon. She has interviewed all of the other girls in her classroom to determine how many of them have their own phone. She has banded together with a classmate who is similarly deprived and they have made bar graphs and pie charts to display the cruelty with which they must contend. Eve, knowing the limits of my patience, is an expert at the art of parry and thrust. She pushes pushes pushes until I am just about to the wall and then she retreats. Sometimes for days at a time and just when I least expect it, she strikes again from a different direction. I can hear the gears in her brain turning, working on new angles to use.
I don’t really remember when I got my first cell phone. For me, the equivalent pre-teen angst was most likely being allowed to wear makeup or shave my legs. I never had my own phone in my bedroom and, as a latchkey kid, the lobbying to be left home alone was not an issue. I was struck this morning by the thought that, although I must have pleaded with my mother to wear eyeshadow and mascara, I don’t really recall that first day I went to school all made up. Ironically, I can count the number of times I’ve worn makeup in the past ten years on the fingers of one hand.
I have a friend who refused to own a cell phone for years. While the rest of us had ours tucked into our purses or pockets, she held out on some principle that was mysterious to the rest of us. She didn’t need the ‘toy,’ wasn’t intrigued by the notion of calling people whenever she wanted to, and as soon as Skype became available, she even got rid of her home phone. She does have a cell phone now, I suspect due to the fact that she has two kids in two different schools and lives in a large urban city and works part time outside the home.
Whatever the reason she finally capitulated (and I know Bubba and I will, eventually, too), I wonder if she looks back on that moment and senses something pivotal about it. I’m betting she doesn’t. I’m betting that the majority of times she is compelled to pull her cell phone out of her purse to answer or make a call, she simply takes it for granted. No matter how much Eve fights to have one or how strong my friend’s conviction was not to have one, the moments, months, and years that follow the actual acquisition of the cell phone almost instantly erase the memory of the ‘before-time.’
I wonder how much of that is due to human nature. How many times have we as individuals and as groups of like-minded people, fought hard and long for something that we truly wanted or believed in and, once we accomplished it, taken it for granted? I know that Eve feels that getting a cell phone will have a domino effect in her life that will make it so much better. My friend thought that the slippery slope she would get on simply by purchasing a cell phone wasn’t worth it. I am willing to bet that neither of those things is true.
There are some times in our lives where the before and after are markedly different. For those people who lived before indoor plumbing was widely available in the US, the after had to be unimaginably glorious. Not having to pee in a bedpan in the middle of the night or walk outside in the snow to poop in a wooden shack? Priceless. But for so many of the things we fight for or against, the changes are minimal or it takes us such a small amount of time to incorporate them into our lives that it makes me wonder what we’re really fighting for.
October 19, 2010/5 Comments/by kariodriscollwriter_fan60j
https://kariodriscollwriter.com/wp-content/uploads/2010/10/IMG_0207.jpg 200 150 kariodriscollwriter_fan60j https://kariodriscollwriter.com/wp-content/uploads/2020/08/web-logo-Kari.png kariodriscollwriter_fan60j2010-10-19 17:36:002020-08-02 18:15:38Before and After