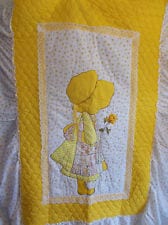 I know it’s inane, but they really do drive me nuts.  And I’m willing to admit it and I feel like I am old enough to do away with them altogether without apology.

I was a child of the 70s. My sister and I shared a bedroom with matching twin beds covered in matching Holly Hobbie bedspreads – yellow with yellow lace around the edges – and pillow shams.  Our beds were made every morning after we reluctantly rolled out of them to start the day.

As a teenager (of the 80s), I was lucky enough to have the thing most of my friends wanted – a waterbed.  It was my mother’s concession to marrying a man who moved us from the town we had lived in the longest to the beach where he had always wanted to live.  My brother and I both got one – a double-size waterbed with stuffed naugahyde padding around the edges and a built-in headboard with padded doors hinged at the top so you could hide books or other things inside.  When we got the beds, we were warned sternly by my stepfather that it was important to always make the bed because if you didn’t two (bad) things could happen:

1. The heat from the water mattress would escape up into the room, causing the bed’s heater to work on overdrive to keep the mattress/water inside warm and drive up the electric bill, and

2. The cats could jump up on to the bed, drawn by its warmth, and dig their claws in, puncturing the mattress.

Since the cat(s) often slept in my bed, I became quite good at patching holes in the bed.
Since my stepfather didn’t really understand the notion of privacy, I dutifully pulled the thick comforter over my bed every morning before heading to school.

As soon as I left for college, I vowed to never make my bed again.  It is one of those things that always seemed silly to me, like those people who brush their teeth right before bed and then again first thing in the morning.  Seriously? Yes, you can tell your dentist that you brush twice a day, but you haven’t eaten anything in between those two brushings, so what does it matter? Wouldn’t it make more sense to brush them on your way out the door after breakfast? Or mid-morning? After lunch?

Anyway, over the years I have stuck to that vow.  Once a week or so, I change the sheets on the bed and then I make it because it would be ridiculous not to. But otherwise, I rarely feel compelled to get out of bed and tidy it before starting my day.  And I have never felt compelled to dress it up with a pile of pretty pillows made just for that purpose. Until last year, when we put our house on the market and my realtor started talking about staging the house for showings.  She advised me to go out and get a new comforter set, complete with pillow shams and coordinating throw pillows.  Even though I knew she was right, it made me nuts to go spend a few hundred dollars on something like that.

The house sold in three days and now I’m stuck with that comforter set.  It has two King-size pillow shams and two square pillow shams for a total of four extra (enormous) pillows that will never fall under the weight of someone’s head.  Want to know where they are? Two of them routinely find themselves propped on top of the laundry basket in my room where I have to shove them aside every time I want to put some dirty clothes in. The other two rotate between the cedar chest under the window and the top of the dresser. I won’t put them on the hardwood floor because the dog would assume they were his new bed, and I don’t put them on the bed during the day because that is too close to ‘making the bed’ for my taste.  One day a week, when the sheets get changed, they make it to their prescribed spots, arranged at the head of the bed. Otherwise, they are simply in my way.  And yet, I don’t get rid of them. Because who gives two King-size pillows (with shams) and two 14×14″ pillows (with shams) to Goodwill without the matching comforter?

And so I ask, for the people who have throw pillows on their beds and who actually make their beds every day; what do you do with the pillows at night when you’re sleeping? Do they take up space on a chair in your room? Do they get unceremoniously tossed on the floor? Where do they live? And how did this trend of decorating our beds even begin in the first place?