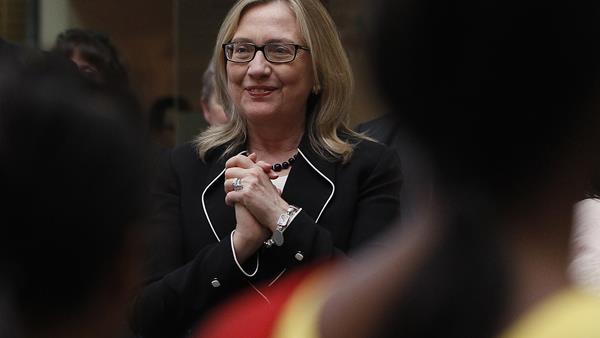 I feel like I know her better now.  I am so pleased that she spent four years as the Secretary of State, living her ideals and making a name for herself that didn’t involve her husband.  I was impressed with her calm approach to difficult, polarizing situations and her ability to vehemently defend her actions and beliefs.

I was incredibly proud of her words as she left the job yesterday:

“And that is the final lever that I want to highlight briefly. Because the jury is in, the evidence is absolutely indisputable: If women and girls everywhere were treated as equal to men in rights, dignity, and opportunity, we would see political and economic progress everywhere. So this is not only a moral issue, which, of course, it is. It is an economic issue and a security issue, and it is the unfinished business of the 21st century. It therefore must be central to U.S. foreign policy.”

The entire article is here.

I will also admit that, while I passionately believe in equality for women and girls, social justice for all people regardless of gender, race, sexual identity or anything else, I sometimes worry that I live in a bubble.  I sometimes worry that, by pushing this agenda, I am somehow disenfranchising boys and men. I get a little defensive because I am afraid that it might seem as though I am being unfair to half the population of the world.

And then I take the dog for a walk and, as usual, things get a little less murky. Because what I am really hoping for, pushing for, advocating for, is equality and the understanding that women and girls are a vital part of communities all over the world.  I find the head space to remind myself that what I am doing is not taking away from anyone.  It is only when I buy into the notion that there is not enough to go around that I begin to feel guilty about adding resources to help women and girls around the world.

The first item on our “House Rules” list that hangs, laminated, in the kitchen is this:

No Scarcity. I agree to live by the knowledge that there is enough for all of us if we cooperate.

By advocating for women and girls, I am simply honoring their innate strengths – what they bring to the table – and hoping to build on them.  I am acknowledging that until women and girls are seen as important, valuable parts of each and every community, they will continue to be abused and degraded and not allowed to be part of the conversation.  They will be married off against their will, sexually assaulted and hidden away from society behind closed doors and restrictive clothing. They will be told to act and speak and dress in certain ways under threat of violence or humiliation or simply, being ignored.

“Thousands of candles can be lighted from a single candle, and the life of the candle will not be shortened. Happiness never decreases by being shared.”  Buddha

In wanting a better life for girls and women throughout the world, I am not taking advantages or resources away from men and boys.  This is not a balance sheet or a seesaw where one side must suffer if the other does well.  Our world is an ever-changing, growing, moving mass of humanity that is capable of cooperation beyond our wildest dreams and when we light one another’s candles, we all end up seeing better for it.  We are all raised to higher heights when we extend a helping hand to those in need.