A few days ago our neighbors had a tree service come take out an enormous tree on the sidewalk near their property. The trunk was probably five feet in diameter and I don’t even want to hazard a guess as to how tall it was.  I think it was some kind of maple, rough-barked and stolid, standing on the corner like some kind of massive pin that held the block in place to the earth. 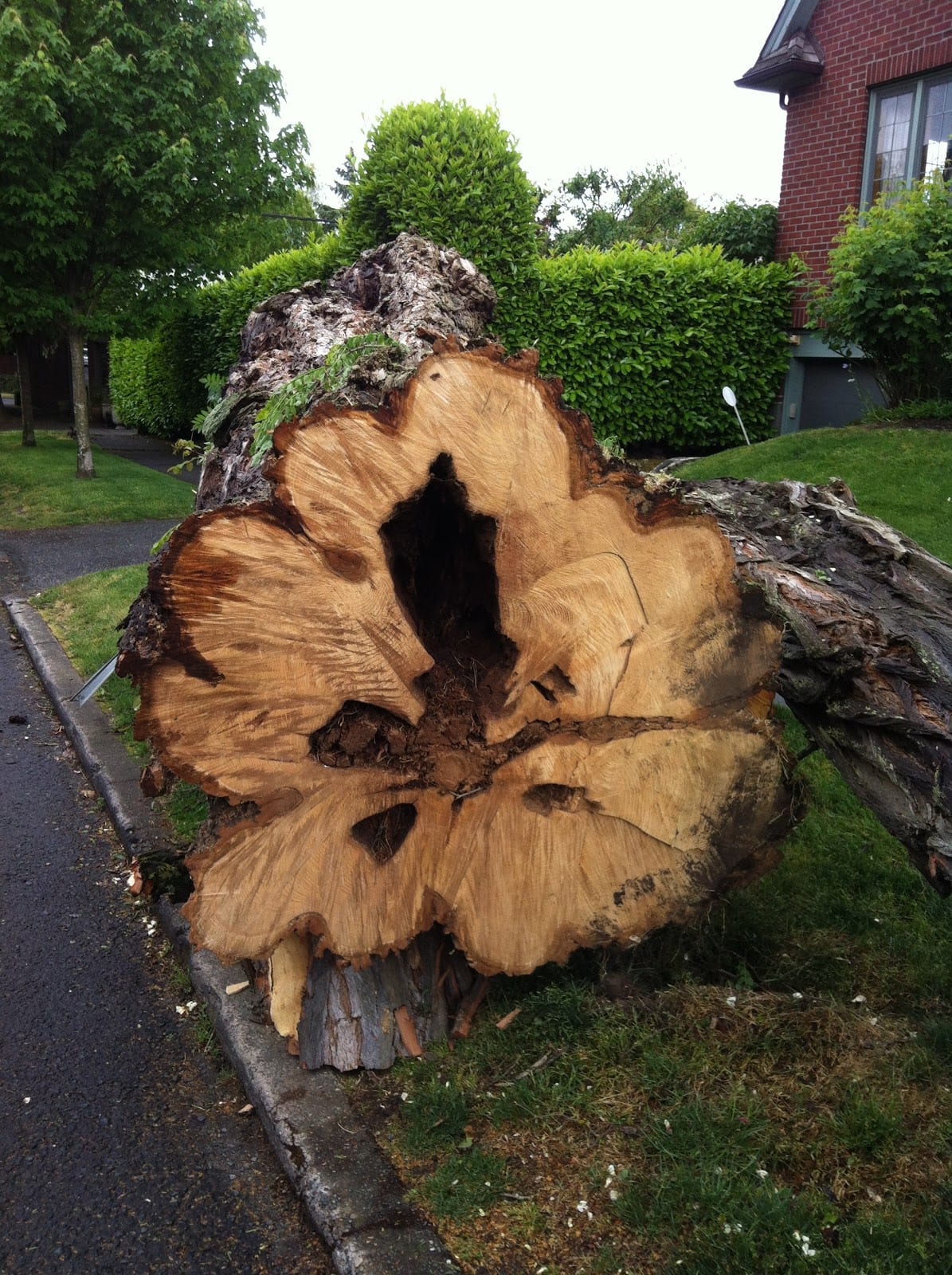 As I walked past yesterday, before they had come to haul away the chunks of debris, I could see the center of the trunk eroded like so much sawdust and thought to myself, Aahh, it was dying. That’s why they took it out. I don’t know about your city, but our city doesn’t take too kindly to removing established trees, especially those considered ‘exceptional’ examples of their species – ones that are large specimens that have been in the ground for decades.  We like our greenery here in the Pacific NW and God help you if you want to embark on a construction project that might necessitate the removal of a tree on your property. The neighbors will stage protests and tie neon ribbons around the trunk, write letters to the city planning office and plead the case for this poor, defenseless tree like they wouldn’t for a human on death row.  The fines for removing a tree without a permit are based on the assessment of ‘fair market value’ for the particular tree, and can run to tens of thousands of dollars. 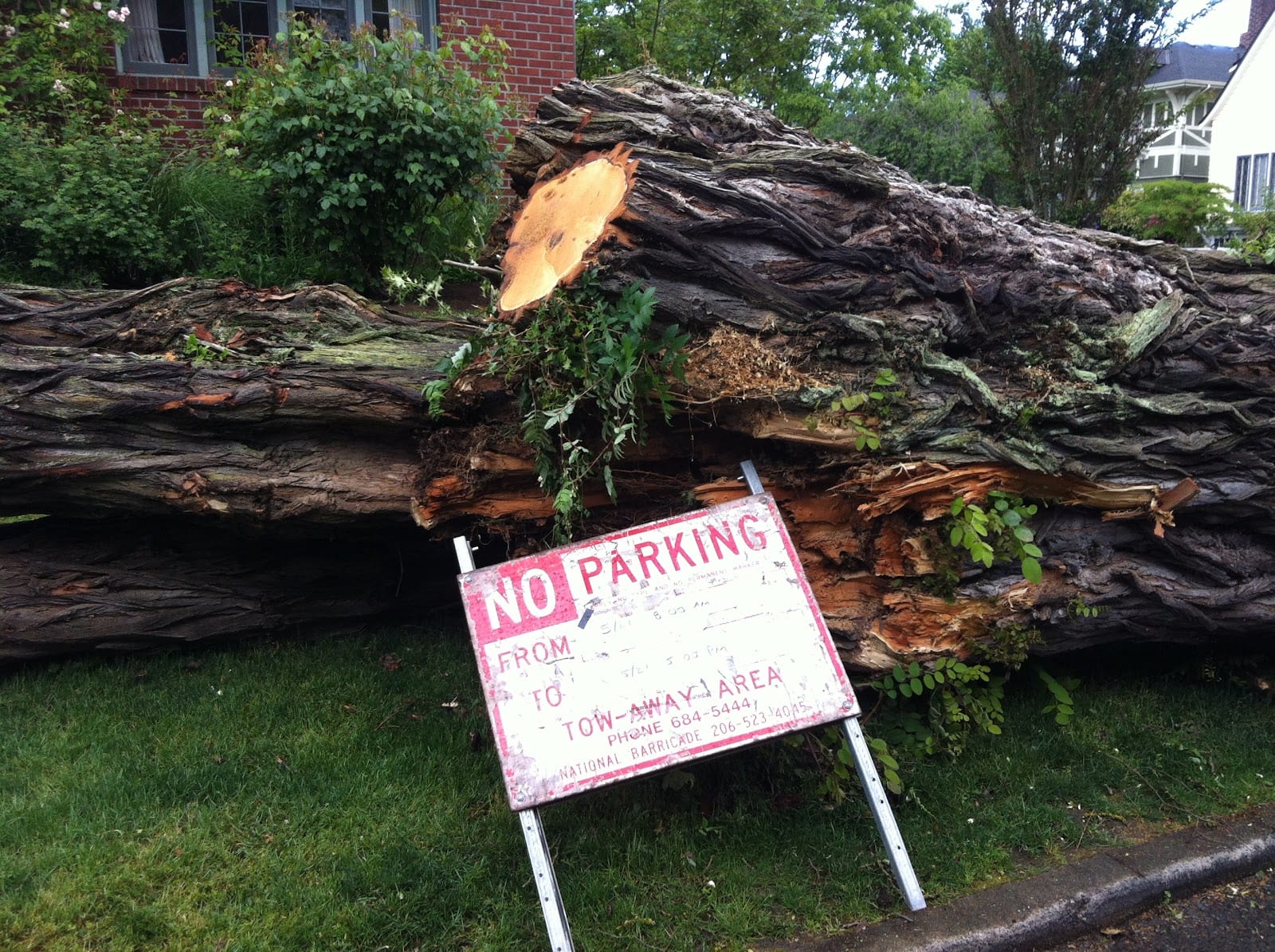 But as I strolled past this one, I thought I could plainly see why they had removed it.  Until a man and his dog came around the corner and stopped short. Thin and grey-headed, the bearded man in his Seattle-uniform of khakis and work boots and olive green vest led his dog up to the remains to check it out.  I was still about half a block away and watched them circle the pile of limbs and trunk sections, the dog marking each piece in that special dog-way.  As I neared, I prepared to meet the man’s eye and smile a greeting, but he looked at me and shook his head with a mixture of disgust and sadness. He was clearly unhappy that this tree had been cut down.

I immediately checked my thoughts about the tree removal.  Maybe my assessment had been wrong – maybe what I saw of the inside of the tree didn’t represent disease or a good enough reason to cut it down. Had these people been wrong to do this?

Fortunately, I was able to recognize this pattern of thinking for what it was. Namely, my tendency to assume that my reaction is the wrong one upon encountering someone else who feels very differently than me. Especially when that someone is a stranger, older than me, and male.

As children, we begin forming our opinions by mirroring or imitating our parents. As we move into adolescence, we slowly start to individuate, often by reacting to situations in the opposite way of our parents, but this generally lasts only for a few years as we try out different personalities in order to better determine who we are.  Generally, as we become adults we settle in to some middle ground where we are able to exercise more critical thinking and assess our own reactions and opinions with some degree of realism.  Hopefully, this comes about thanks to parents or other influential adults in our lives who have taken the time (and patience) to guide us through our teenage years as we react to things more based on emotion and erroneous assumptions than clear logical thinking. (That said, if you haven’t read Jonah Lehrer’s How We Decide, you should check it out because he reveals how much of our “rational” decision-making is actually based on emotion and gut-feelings and how important that is).

I spent much of my adolescence straddling the line between adult responsibilities and desperately wanting to rebel but fearful of the consequences.  I often felt as though I was faking it as I worked hard to convince the adults in authority around me that I was capable of taking care of myself both physically and emotionally so that I could be left alone. On the inside, I was terrified of being ‘found out’ for the chickenshit that I really felt like.  That set me up for a deep mistrust of my own opinions and anytime I encountered an older person who seemed like they might have it all together, I fell all over myself to defer to their ideas of right and wrong.  It took years to begin to put stock in my own thought processes and values and, sometimes when I least expect it, my tendency to doubt my own beliefs sneaks up on me.

Fortunately, it’s not important whether or not I think the tree removal was justified, but it sparked a valuable inner exploration of how often I discount my own knowledge without thinking simply because someone else appears to think differently.