This one’s for Chris. He was that guy in high school that was consumed by music. He was the DJ for all the school dances and knew about concerts and new albums slated to debut before anyone else. More than that, though, he has a superhuman ability to listen to music with a critical ear and pull out the nuances of songs and melodies that the rest of us find “nice” or “pleasurable” or “awesome” and name them, describe them, flesh them out and give them life. Yup, Chris’ superpower is music. I love reading his blog because even if I don’t know many of the bands or songs he writes about, he gives them life in a way that nobody else can. And generally inspires me to stretch myself and my music habits. So, Chris, this one’s for you. 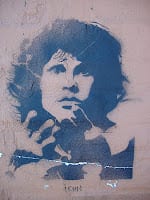 “Show me the way to the next Whiskey Bar,” Jim Morrison croons in that playful, choppy, dancing cadence and I close my eyes and imagine his unruly head of curls bouncing as he prances across the stage. While I own this song, I haven’t chosen to play it in a long time; maybe 20 years, if I’m forced to calculate.
I love The Doors. There is something about their music that sets me down squarely in a beat-up cabin in Central Oregon, watching the melting snow drip from the eaves as I shiver beneath layers of musty old quilts, thick with the smell of cigarettes and marijuana and sweat. It was during one such weekend that I read the biography of Jim Morrison and was alternately enthralled and disgusted by his life of excesses and childishness, his absolute genius with lyrics and poetry and magnetic, mesmerizing charm.
During the week I was a college student, dutifully plugging away in biology and chemistry classes on a Presidential Scholarship, fulfilling my parents’ edict that I get a degree and Become A Success. By 3:00 on Friday afternoons, I was often headed out to the mountains with my high school boyfriend and a carload of his skateboarding rogues, not to return to my other universe until Sunday night. I stepped out of the predictable and planted my right foot smack in the middle of a soggy, muddy place driven by the most basic desires. Sleep when you want. Eat what you want. Say what you want.
I knew I couldn’t exist in both places for long and reading Jim’s biography was the beginning of the end for me. I simply couldn’t envision a life run by carnal needs. Perhaps because this life was perpetually dark, or at least dim. The lighting in the cabin was poor thanks to the monumental trees that surrounded it and the beating the place had taken over the years. Sleeping late meant we were up late, squinting at each other, the light from the fireplace and the cherries of our cigarettes the only illumination. The mood of the music, The Ramones, The Doors, Sid Vicious, was always dark and angry or melancholy and depressing – even when it pretended to be a rallying cry to action.
I gradually moved away, spending more weekends on campus. Pleading exams or papers due, I was able to extend my days bathed in the fluorescent lights of the dorms or the sun in the quad. My boyfriend and his cohorts mocked me and their words felt a lot like the way I envisioned the inside of that Whiskey Bar.
Today, as I sit in a dimly-lit coffee shop and hear that spark of brilliance coming from the speakers that is Jim Morrison, I am able to stop a moment and remember what it felt like to lie under the quilt and listen to an entire Doors CD. Unlike then, I don’t feel the seductive melancholy pulling me to abandon the outside world and exist solely in Jim’s world. I can recall with some fondness the group of kids that we were, seeking our own rebellion and hoping against hope that it had something to do with following a rock star in to a world of indulgence and camaraderie that never had to end.
March 30, 2012/14 Comments/by kariodriscollwriter_fan60j
https://kariodriscollwriter.com/wp-content/uploads/2012/03/jimmorrison.jpg 200 150 kariodriscollwriter_fan60j https://kariodriscollwriter.com/wp-content/uploads/2020/08/web-logo-Kari.png kariodriscollwriter_fan60j2012-03-30 18:33:002020-08-02 17:58:18The Doors: Then and Now