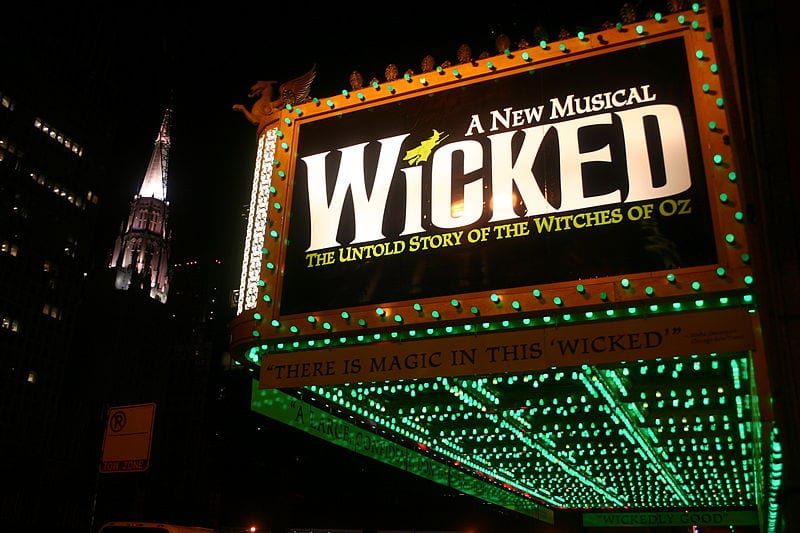 Bubba’s out of town this weekend so I decided we were having a Girls’ Weekend.  I found some tickets to “Wicked” that weren’t crazy ridiculous expensive and made a reservation at a nice restaurant.  The girls were excited to get dressed up and head out for a night on the town and going to see a musical sounded a heck of a lot more thrilling than going to yet another movie theater to eat overpriced popcorn.

After a fantastic dinner of Spanish tapas followed by pumpkin flan (have I mentioned how much I appreciate the girls being adventurous eaters?!), we walked the two blocks to the theater.  None of us had ever seen “Wicked” before, and we had pretty good seats with no NBA-size humans blocking our view or sniffly patrons sitting next to us.

Eve sat in the middle, being a little stranger-phobic, so it was intermission before I could check in with Lola to see what she thought. She is typically very thoughtful at shows, not revealing any outward signs of appreciation or distaste, so I fully expected to have to wait until the show was over to get her full assessment.  The only thing she asked was if she could switch seats with me for the second act so she could get a little better view.

Eve, on the other hand, was thrilled. She repeatedly turned to me with her mouth hanging open in reaction a hilarious moment or a particularly good solo. She was obviously having a ball. When we arrived home waaaaay past bedtime, I asked Lola for her full assessment.

Huh?
Really?
Did I hear that right?
Carefully, so as not to make her feel bad, I asked her why “it wasn’t the best.”

“I wanted her (Elphaba) to hurry up and get wicked. I wanted her to be bad. I kept waiting for that.”

For anyone who doesn’t know the story of “Wicked,” it is the backstory of the Wicked Witch of the West from the “Wizard of Oz.” It cleverly and artfully tells the real story of Elphaba and how she got to be so hated and reviled by everyone in Oz (if she actually was hated and reviled by everyone in Oz).
Turns out she wasn’t all that evil. A lot of it was bad press and how she felt about herself all folded in with some misunderstandings and a bit of entrapment.

Enter the land of Moral Ambiguity.  Of course,  this is the land we all live in, but it doesn’t often rear its head in entertainment. Kids’ programs are rife with Good v. Evil, Hero v. Villain.  There is very little moral ambiguity or compassion or striving to understand why the bad guy is the bad guy and how he got that way.  When your child is two or three or four, the world is explained to them in terms of can and can’t, yes and no, good choices versus bad ones.  It’s faster that way and easier for them to understand.  But at some point, this world view comes into question and doesn’t serve any of us anymore.  Unfortunately, it makes things a lot murkier and more challenging to understand, and I think Lola is wishing for the simplicity of that black and white Universe again. How the heck do you know who to root for when Glinda the Good Witch isn’t all good and Elphaba isn’t downright deplorable?

——————————————————————————————————————–
The Girls’ Weekend wasn’t all tapas and theaters.  Earlier in the day, the three of us decided to work on a project I’ve been wanting to start since we moved in June.  We made it about 10 minutes before the girls’ opinions clashed like two cymbals, sending reverberations through my brain and chest.  Lola, having chosen not to eat breakfast, lost her mind like she always does when her blood sugar drops, stomping down the hall and slamming the door to her room, throwing herself on the bed and screaming into a pillow over and over again.  Eve rolled her eyes and made some comment about how she was clearly in the right here.  I decided to cut my losses, abandon the project and go start some laundry.  As I walked away, Eve exploded.

“Oh, so just because she won’t compromise I get punished? You just walk away from me?”

As I stopped a few feet away and turned to face her the diatribe continued.

“She ALWAYS does this! She NEVER wants to think about what anyone else wants!”

I opened my mouth to refute the claim that Lola is the poster child for selfish behavior.  “That isn’t true and you know it. She is very generous and thoughtful –“

“HA! She is not! Every single day she is mean and whenever I ask her to compromise she throws a fit!!”

I had to choke back laughter. I am not sure who she was talking about, but Lola is not anything like Eve was making her out to be. Unfortunately, Eve was on a tear. She had crested the top of the hill and was steaming down the tracks 120 mph. No way I was standing in front of that thing with my hand raised. She was not about to listen to anything I said that didn’t fit neatly in to her idea of how evil and wrong her sister is.

Thankfully, five minutes later she had run out of steam. I let her sputter to a stop and sat down.  I pointed out that Lola had likely been sitting around the corner in her bedroom listening to every single nasty word about her that came out of Eve’s mouth.  I suggested that maybe hearing her sister characterize her as a selfish, mean-spirited, hateful person just might feel pretty awful.

“If she hears you saying those things about her, she just might believe you mean them.  The fact is, you were both inflexible and you both got angry. There is no one of you that was being the Angel to the other one’s Devil.”

Huge eye roll. “Oh yeah? She is the Devil! She is! She is so mean to me every single day!”

“She isn’t. I can point out to you dozens of times when your sister thought about you before thinking about herself.  I know it’s easier to remember the times when she was mean or pissed you off, but if you’re being completely honest, you have to admit that there are more times when she treats you with love and respect than there are times when she is nasty and mean. And I truly believe that she is taking your hateful words to heart right now. That she is probably feeling really terrible that you think she is 100% awful and unlovable.”

“I was exaggerating, Mom! I was angry! I didn’t really mean that she’s that bad!”

“How does she know that? She’s upset, too, and There is no Right person and Wrong person. There may be times when one of you is more willing to be flexible than the other, but that doesn’t mean one of you is bad and the other one is good.”

Of course, so much of what the girls are experiencing in the world right now is about this sort of black and white thinking.  While I am doing my best to not vilify anyone, it is often difficult for me to not paint political candidates in shades of Right and Wrong.  And even if they aren’t getting it at home, the radio and television (and the neighborhood yard signs) are full of polarizing slogans and messages that pit candidates against each other in the most oppositional of ways.  We are fully soaked in A vs. B, Good vs. Evil until Election Day and I’m feeling a little overwhelmed.  On the one hand, I’m with Lola, that if there is a clear choice between Glinda and Elphaba, I feel better about making a decision. But I’m old enough to know that nobody is all bad or all good and I wish it wasn’t human nature to characterize each other in that way so as to justify our own actions and reactions.