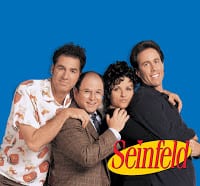 Do you remember that Seinfeld episode where George Costanza discovers that if he identifies his immediate behavioral instinct and acts precisely the opposite way, his life improves instantly? I’ve been pondering that one lately…

Saturday morning I woke up with an incredibly stiff neck and sore shoulders, not an uncommon experience now that I’m not so young anymore, but still somewhat limiting. As the day wore on, the stiffness turned to soreness and by 3pm, it was definable as pain. Saturday night I found myself unable to sleep because I couldn’t find a position that would alleviate the pressure and pain. Waking up on Sunday morning, I was completely unable to turn my head to the left and I had the distinct impression that one of the vertebrae in my neck was coming unstacked like a Jenga piece. The ones below were trying mightily to stabilize the tower of my spine, but there were a few times I felt as though the whole thing was going down. As the day wore on, I occasionally tried to correct my posture by tucking my chin back a little and straightening my shoulders, but invariably, my protective measures involved shrinking down into myself and letting my head turn to the right slightly because it was the only thing that brought the pain down from an eight to a four.
I began wondering about people who suffer with chronic pain and how they cope with it day after day. Every task I attempted – cooking, sitting on the couch with a book, playing a board game with the girls, sitting at my computer – triggered some discomfort until finally, I was nauseous with the effort of trying to find something to do that didn’t hurt. I tried to busy myself and distract my attention from it, I tried taking anti-inflammatories, I even tried two glasses of wine and a hot bath until I decided to stop running from it.
Going head-on into the pain and exploring it mentally, feeling it and categorizing it in each of the places it showed up wasn’t terribly effective at alleviating the pain, but it did remind me that my instinctual protective measures of curling up and letting the pain be in control were exactly the wrong ones. Even though it hurt to stretch my muscles, aligning my spine and giving my chest muscles room to expand was what I needed to do. Well, that and see my amazing chiropractor on Monday….
This is not the first time in my life that I have fought to distract myself from pain or ignore it or mask it and found that it is entirely useless. Whether it is emotional pain or physical pain, often part of the solution is examining it to discover the origins and maybe causing a little more pain in order to get back where I need to be. I decided to think about whether there is a pattern in my backward instincts and, while I haven’t completely figured it out yet, I do sense that the times when I react protectively out of fear, I am often only prolonging the discomfort. When I take the time to step outside of the emotions provoked by my pain and acknowledge my fears, I can usually identify some sort of solution, or, short of that, at least the fear goes away for the most part.
Now, that time when I yanked Eve out of the street in Rome because some psychotic local on a scooter was about to run her down? That was definitely fear and it was certainly instinct, but I’m also certain that it was absolutely the right thing to do. Either that or quickly locate a long steel bar to stick in his spokes, but, nah, on second thought, I did the right thing. I scared the bejesus out of Eve and she didn’t forgive me for a couple hours, but she was only four, so I get it.
January 25, 2011/7 Comments/by kariodriscollwriter_fan60j
https://kariodriscollwriter.com/wp-content/uploads/2011/01/seinfeld.jpg 186 200 kariodriscollwriter_fan60j https://kariodriscollwriter.com/wp-content/uploads/2020/08/web-logo-Kari.png kariodriscollwriter_fan60j2011-01-25 20:23:002020-08-02 18:13:05Something to Ponder
7 replies