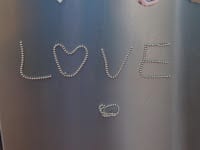 I am a pacifist. It started when I was a freshman in high school and I read Thoreau’s “Civil Disobedience.” I was so captivated by it that I convinced my English teacher to add it to the semester’s teachings, much to the chagrin of the rest of the students.

On beyond the idealistic years, (several of which I spent as a vegetarian, as well) of high school and college, while I protested the death penalty and marched in pro-choice rallies, I still believe that war is never the answer to a nation’s problems. I am not naive enough to think that there are simple solutions, and I don’t intend to get into a political or moral discourse here, and as a realist and a citizen of today’s world, I fully accept the reality of war in our human experience.
I have never been much for history, however, and so my understanding of war and other conflicts that have happened in the past is mostly based on what I learned from textbooks in the 1970s and 1980s and what I hear on NPR now. But one thing strikes me over and over again and that is just how easy it has become for nations to wage war on an enormous scale. Notwithstanding the financial cost, thanks to the technologies we have developed, instead of hand-to-hand combat with your ‘enemy,’ where you might be forced to look him in the eye and acknowledge his existence as a fellow human being, we can now wipe out entire city blocks from miles up in the sky as though this were some ultra-realistic video game. Instead of smelling the metallic tinge of blood on the ground or one’s clothing, we simply see smoke and rubble. The depersonalization of conflict seems as though it would make killing less psychologically painful for the soldier. Certainly not for those on the ground who are witnessing the violence, nor for those who are dispatched to clean up the mess, patching up limbs and faces and removing bodies from battlefields, but for the pilots dropping bombs and the generals ordering airstrikes, it seems that they are removed from the acts of violence they are committing.
[Please know that I am not condemning any of those who served in the armed forces. I know that their work is done with conviction and a desire to help. I support their sacrifices in the name of their beliefs without judgment, despite the fact that I fervently wish for a world in which war did not exist.]
Rather than anger, the subject merely prompts sadness on my part. Until yesterday when I was listening to a reporter embedded with the rebel forces in Libya describe the scene there. His report served to bring the listeners close enough to hear the shells explode and get a vivid picture of the loss of life. It occurred to me that, since this phenomenon of sending reporters out with troops began, the tide may have begun to turn. The average citizen who is privileged enough to get honest media coverage is not just a little bit closer to truly understanding the impact of warfare on human beings. Despite the fact that our weapons are still technologically capable of letting us kill masses of other people from afar, there is a human element. Reporters can interview physicians in the battle zone and describe with painful clarity what is happening to individuals, soldiers and civilians alike, real-time. While many of the soldiers involved in the conflict may not be fighting face-to-face, those at home listening or watching the coverage can actually see what we are doing to each other in the name of war/conflict/uprising/substitute other euphemism here. And if there are those who aren’t inured to the violence, perhaps we can begin to build some understanding of just exactly the harm we are causing to other human beings. Perhaps this understanding can lead to examination of our goals and, if we can lean into the discomfort of killing other people because they don’t agree with us or because they have something we want, maybe we can begin to have a dialogue about whether or not there are other ways to go about living together on the planet.
I can only hope.
April 28, 2011/2 Comments/by kariodriscollwriter_fan60j
https://kariodriscollwriter.com/wp-content/uploads/2011/04/love.jpg 150 200 kariodriscollwriter_fan60j https://kariodriscollwriter.com/wp-content/uploads/2020/08/web-logo-Kari.png kariodriscollwriter_fan60j2011-04-28 00:37:002020-08-02 18:10:15Make Love, Not War

You Make a Mess…

The Absurdity of Violence