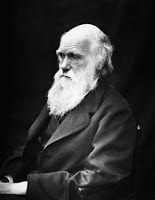 I love Charles Darwin. Ever since we had to pair up and do experiments on pea plants in high school biology, I have been fascinated by evolutionary science. It makes so much sense to me and I love the predictability of putting together different scenarios and knowing what you’ll get. I use it to my advantage a lot, too, telling Eve that she’s lucky she got my eyesight and not her father’s (all the while overlooking the fact that she definitely got my teeth which, so far, has cost Bubba and I over $6,000.00 in oral surgery and orthodontia and we’re not done yet!). I also like to point out that Lola’s cowlick’s are her father’s fault.

Often, when there is some cultural phenomenon that bothers me, I go into what I consider my “Caveman Reverie.” Just this morning when Eve and Lola were bickering about the placement of the car’s garbage bag in the back seat and why it ought not to sit closer to one of them than the other (I swear, the only thing in it were gum wrappers and the label from Lola’s pink lemonade – not vomit or anything), I began wondering why they fight so much.

“You know, girls, I suppose back in Caveman Days when siblings had to compete, this snarky behavior was probably necessary. You know, they had to make sure that they were the preferred kid so that when there wasn’t enough brontosaurus meat to go around, Mom and Dad would choose the kid they liked the best to give dinner to. But, honestly, now? No evolutionary reason for you two to fight like this. So knock it off.”

I’m pretty sure they shut off all listening capabilities as soon as I said the words, “you know.”