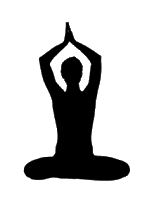 There are few words that slam into my gut with such force as FAIL.

I don’t mind tripping up, making a mistake, having to say, “Oops!” or even (gasp!) screwing something up. But I don’t like to FAIL.
Failing seems so final. So irretrievable. So…well, all-encompassing. It is a short leap from FAIL to FAILURE. There is no corresponding descriptor for someone who makes mistakes. They are not a “mistaker.” You can describe someone as a screw up, but at least in my mind, that conjures up teenage boys shoplifting cigarettes from the mini-mart or shooting spitballs in class and getting caught. There is redemption available from that, even if it takes a while or a move out of town to college where nobody knows your delinquent teenage history.
I went to a new yoga studio last week. There was this collective group coupon thing and the studio was near my house and, normally it is prohibitively expensive, but with this deal I could try it out ten times for pretty cheap. And my girlfriend was going, too, so I thought I’d try it. And at this point, I’m pretty sure that unless I can avoid taking a class with the owner of the studio, I won’t use the remaining classes I paid for. Because he likes the word FAIL. A lot.
Despite his admonitions to not think too much, be in the moment, respect our bodies’ limitations, and remember that yoga is primarily an exercise in training the mind and not the body, he quickly went all Marine-Corps-boot-camp-break-’em-down-to-build-’em-up on me. At one point he polled the class to see if we wanted to do some “ab work” (although I’m pretty sure he was going to do it no matter what anyone said). He then proceeded to have us to 200 crunches. In a room heated to 104 degrees. After already doing nearly an hour of intense yoga. And did I mention that even the floor is heated? So lying down to do crunches feels like as much relief as a slab of bacon feels when you flip it from one side to the other in a hot skillet.
We didn’t know we were doing 200 crunches. Thankfully. I am pretty sure I would have set my mind to cheating from the start had I known. Instead, he had us lie on our backs, extend one leg up into the air at a 90 degree angle to our torso, and put the other one straight out in front of us, hovering above the floor about two inches. And then do crunches. And he counted. And at about 40, I took a break. I rallied again from 60-80 and then took another break. And at 100, his booming voice filled every nook and cranny of the room.
“For those of you who haven’t FAILED (for the record, I’m not exaggerating his use of the word here – he put a lot of emphasis on that hateful set of letters), hang in there. Those of you who FAILED, forget it. But for those who didn’t FAIL, go ahead and hold it there for a moment. If you FAILED, I already know. This room has mirrors everywhere. You can’t fool your instructor.”
Ouch.
And after those stellar performers who are somehow motivated by NOT FAILING held their quivering abs in flexion for another ten seconds or so, we switched legs. And after the next 100 crunches, he repeated the same speech, just in case those of us who felt so badly about our inability to do each and every crunch on one side had already forgotten how much we had FAILED.
Yeah, I won’t be back. At one time in my life, the avoidance of the appearance of FAILURE would have motivated me. But only if I knew it might be an issue before I started something. Like a test at school or a race at the track meet or peeing my pants onstage during the ballet recital. But after the fact, it just feels mean. And, now that I’m not a kid anymore, it pisses me off.
So when I turned on my local NPR station yesterday to discover Tim Harford talking about why failing is so important to our learning processes, I was intrigued. His new book, “Adapt: Why Success Always Starts With Failure” sounds like something I want on my bookshelf. As the interview progressed, I had that feeling you get when something happens just the way you expect it to. Like when you come home to see your cat lying quietly in the sunspot on the living room carpet and, as you reach out your hand to stroke her back, that delicious warm, silky feeling shivers into your palm just like you knew it would. That’s how my brain felt listening to Tim Harford talk. We know this stuff. We know that making mistakes is vital to gaining knowledge. We know that for every success story, there are underwater-icebergs full of Whoops! moments. But we still push each other to be infallible. To avoid looking silly or miscalculating. Or FAILING. And I suspect that, often the words we use in situations like this have so much more impact than we know. Like I said, I don’t mind making a mistake or even screwing up.
I don’t honestly know whether I could have sucked it up and forced my body to do 200 crunches under the cracking whip of Mr. Yoga Ego. I do know that the 100 or so I actually did made my stomach muscles sore the next day. A good sore. A sore that meant I did some. And maybe it means that next time I’ll try for 150. Or not. Regardless, it doesn’t speak to my worth as a human being. Or a yogi. And it doesn’t mean I FAILED.
May 26, 2011/7 Comments/by kariodriscollwriter_fan60j
https://kariodriscollwriter.com/wp-content/uploads/2011/05/240px-Silhouette_yoga.png 200 152 kariodriscollwriter_fan60j https://kariodriscollwriter.com/wp-content/uploads/2020/08/web-logo-Kari.png kariodriscollwriter_fan60j2011-05-26 18:03:002020-08-02 18:09:29Why FAIL is a Dirty Word