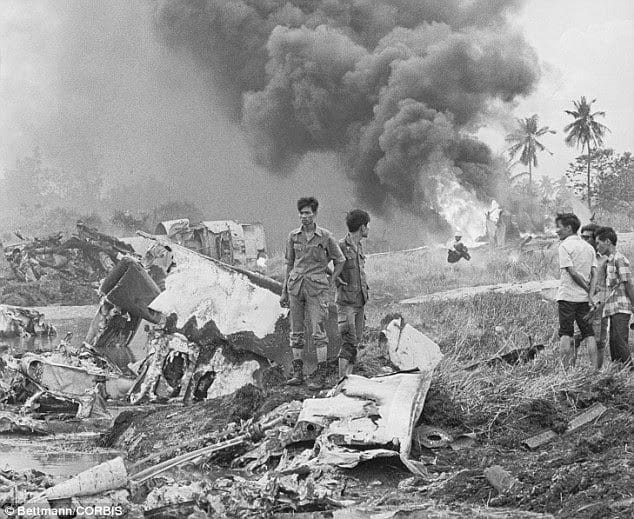 I have Operation Babylift to thank for my little sister. And perhaps some divine intervention, given that she was on the plane that crashed in 1975 and killed over a hundred of the passengers – orphans and adults evacuating them.

To this day it is hard for me to imagine strapping scores of infants to airplane seats. We would be reported to CPS these days for doing such a thing, and I suspect if I had been one of the nurses charged with tending to the babies, I would have been a nervous wreck trying to keep an eye on them all.

Every time I think about this amazing story, I can’t help but feel that my sister’s survival, at less than two months old, means something big. That the fact that she not only survived her birth in a war-torn country, but then lived her first four weeks of life in an orphanage, was strapped into an airplane seat with hundreds of other infants and survived a horrific crash, only to be flown across the world to a foster family who would come to discover she had a tapeworm and multiple food allergies means something big.

I don’t know what it means. I can’t imagine that it means the same to her that it does to me. I don’t know what it’s like to not know where you come from (all of the orphans’ records were destroyed in the crash) and to grow up in a small town in Oregon where nobody looks like you – not even the people in your own family.
I do know that when she arrived in our house, the local media showed up, too. I was three years old and completely unfazed by the reporter or the photographer, but I was entirely enthralled by this tiny little doll someone placed in my arms. She was so minuscule and weightless and warm with enormous brown eyes and crazy black cornsilk hair that stood up in all directions. I promptly christened her mine – a moment not lost on the reporter, as he quoted me in the article for the newspaper.
To this day, I am still not sure what it all means, but April, 1975 is an important part of my life and it always will be. It was the month that I gained a sister. Regardless of the political or humanitarian implications of the war in Vietnam and the resulting evacuation of orphans, it forever changed the course of my life.
April 6, 2015/1 Comment/by kariodriscollwriter_fan60j
https://kariodriscollwriter.com/wp-content/uploads/2015/04/babylift2Bcrash.jpg 519 634 kariodriscollwriter_fan60j https://kariodriscollwriter.com/wp-content/uploads/2020/08/web-logo-Kari.png kariodriscollwriter_fan60j2015-04-06 17:23:002020-08-02 15:49:44On the 40th Anniversary of Operation Babylift