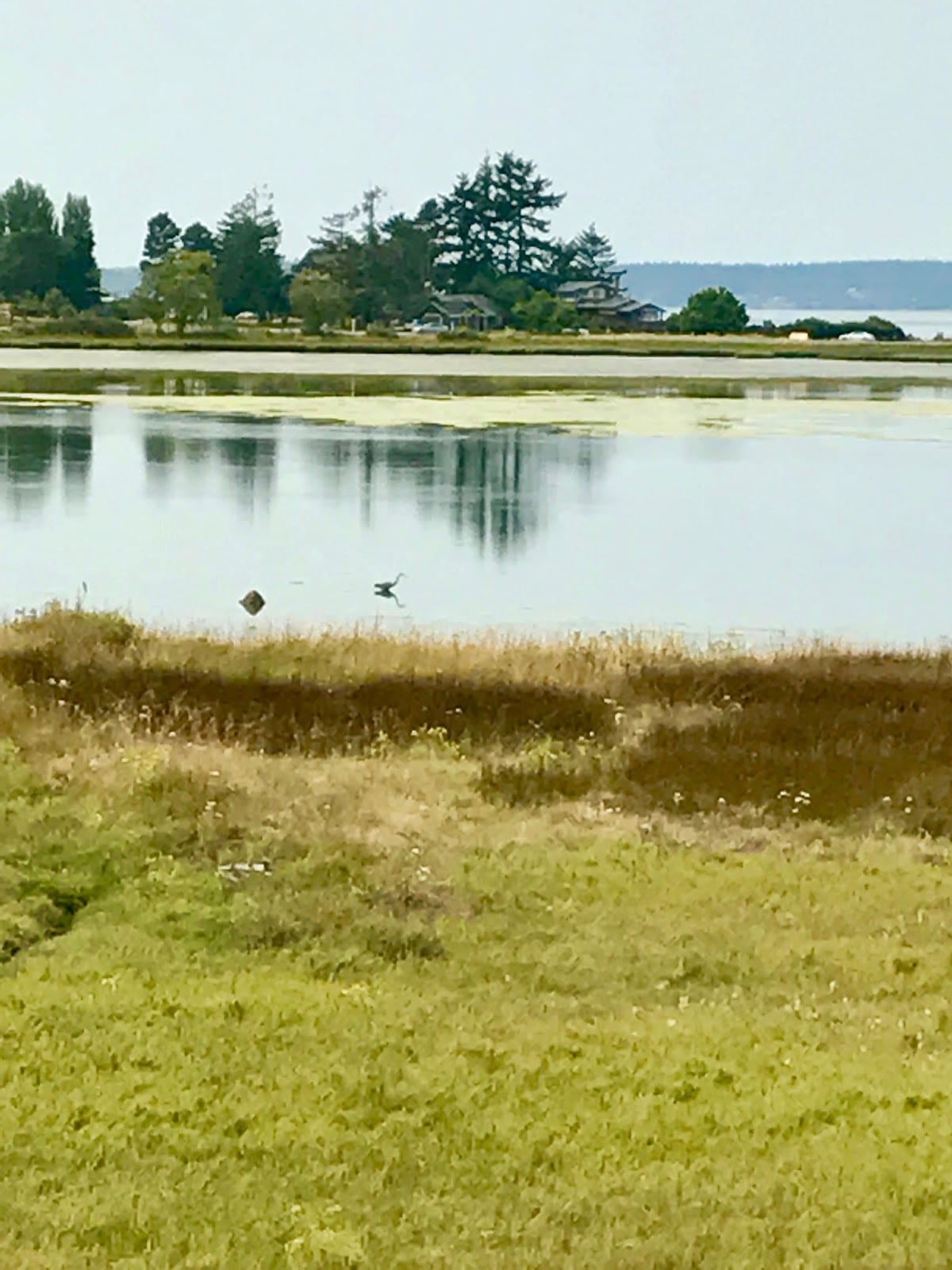 The house I am staying in is on a spit of land with a westward view of a bay and another spit of land. All day long, I could sit on the deck and watch the birds – gulls, heron, eagles, ducks – fish and splash and swim in the shallow, sandy bay. And just beyond it, on that other long finger of land, cars and trucks come and go, with the occasional knot of bicyclists and the rare jogger. There are no homes (yet) on that slim finger that is just to the west of where I am, but this morning, I woke to the bones of a crane just forming through the fog, so I know it is only a matter of time.
There are homes in the webbing of the finger, though, the crotch of land that connects that spit to this one, and they are huddled close together with some clusters of wind-sculpted evergreen trees. Sitting on the deck this morning, peering through the thick mist, I am pleased that I can see far enough in front of me to watch the gulls scoop up clams, fly 40 feet up into the sky, and drop them on the rocks beneath to reveal their soft insides. Breakfast. I squint to see the houses just to the west and wonder if, from their vantage point, it is as foggy and grey as it seems to me from here, or whether they, too, have a clear visual field in front of them and I just can’t tell. Optics. 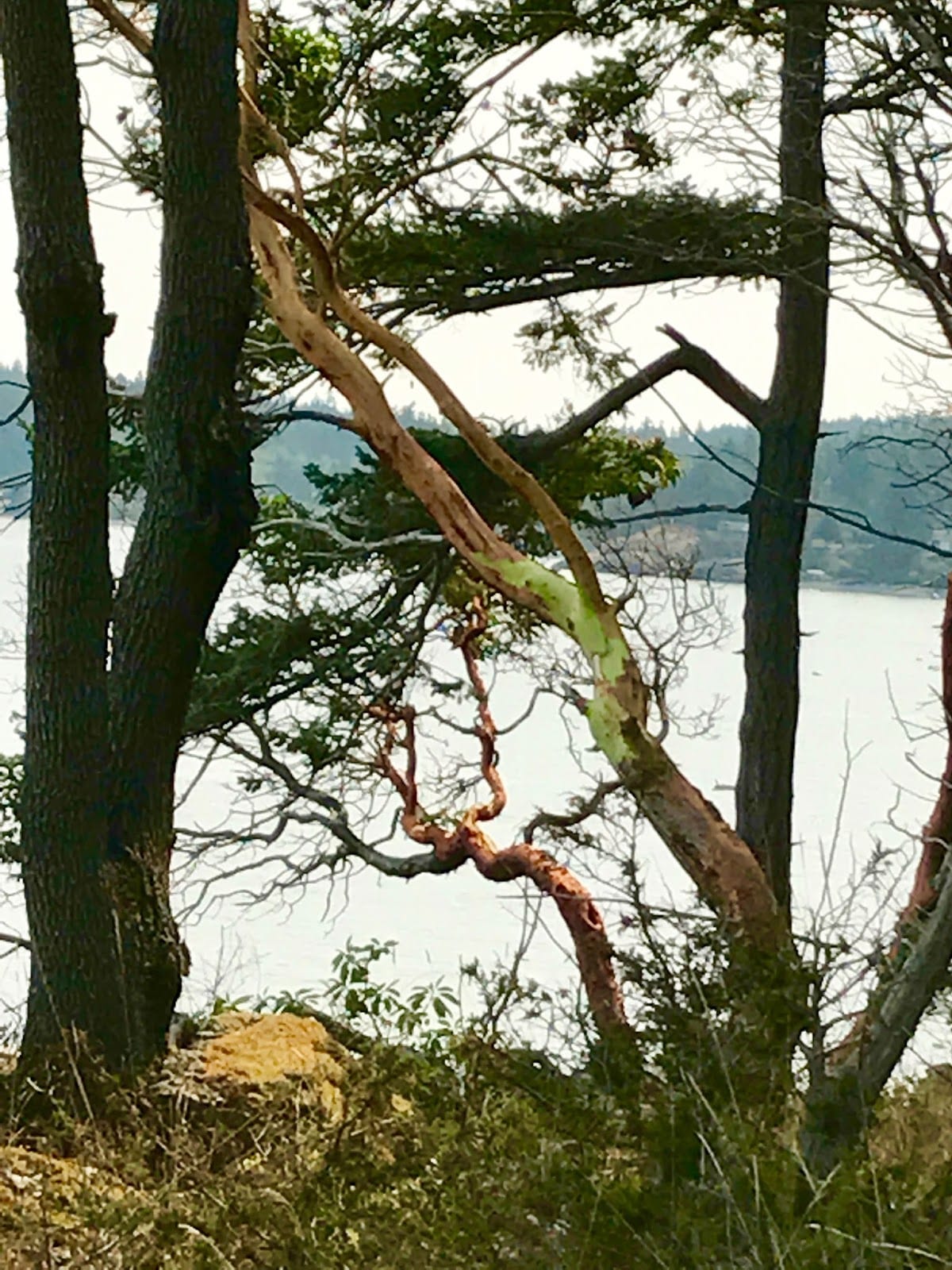 I wonder if we all assume that our vantage point is the Right one. From here, I think those homes are cloaked in fog and mist. I imagine looking out the window of one of those homes to see nothing but grey. But maybe that’s not accurate.
This morning it is so quiet that I can hear the flapping of the gulls’ wings as they rise out of the water. It is the sound of effort, of forward motion, and it prompts me to tighten the muscles of my belly as though I, too, am rising, pulsing my arms to lift myself. I think about how satisfying it feels to be tensing muscles, using my own strength to move. If I could think this way all the time, I would be better at going to the gym. I would have less cellulite and more stamina. Maybe what I need is to live someplace with this view all the time – watching these animals work to live in a gorgeous place. All of their movements purposeful. I am the kind of person for whom going to the gym feels artificial and contrived and there is little that makes me more aggravated than falsehood. 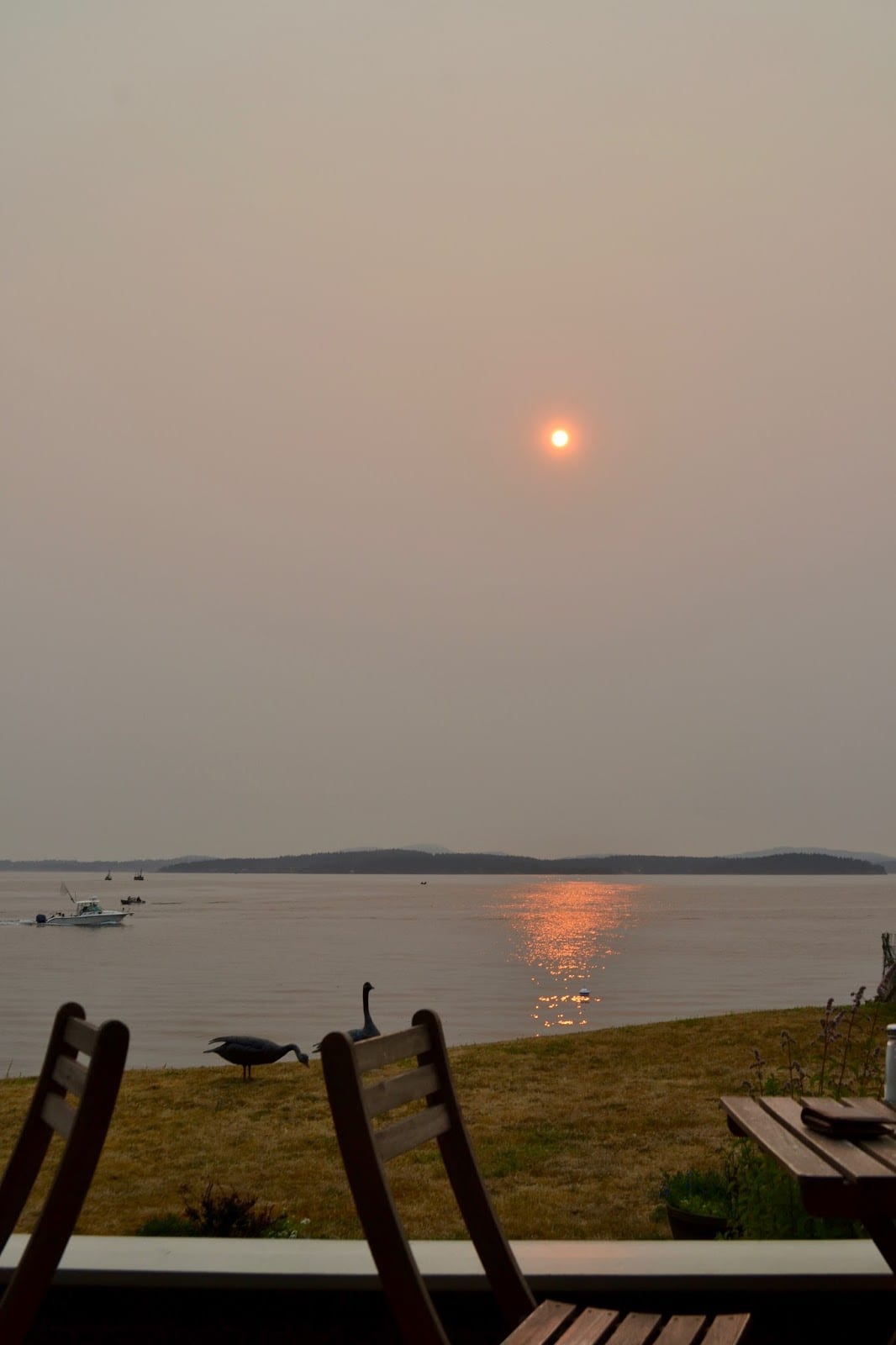 Often, this morning, the peace is punctuated by gunshots. The first one came solo and prompted me to think that some angry gardener was dispatching one of the rabbits that outnumber people on this island. Perhaps he finally got tired of sharing his bounty with the fat bunnies feasting on his labor and leaving droppings in every patch of grass available. Gunshots are nearly always associated with ‘he’ in my mind. I know that there are women who shoot guns. Women who garden and get annoyed. And it’s not unimaginable in this place where yesterday I saw packs of dirt-stained children wrestling in open areas, wandering up to strangers to talk and pet their dogs, women with three or four of their own tagging along – none of whom are old enough to go to school quite yet. It’s not beyond imagination to expect one of them to sit down and bare her breast to a child who is tall enough to stand next to her and feed. That is the kind of island this is – hippies, home-schoolers, people who want to live away from the city. These women can do anything. I can tell. But it is hard for me to reconcile the peaceniks with gunshots. I know that is my own limitation. I accept it. I don’t know if I’ll work to unravel it or not. Right now, I am more interested in why the gunshots are increasing – now coming in groups of three or four. Who is shooting? What are they shooting? Why?
My real desire is for them to stop. I’d like to slip back in to the stillness where the only sound is the beating of the birds’ wings as they lift off of the water or the swoosh it makes when they skid into the bay and touch down.
August 8, 2017/1 Comment/by kariodriscollwriter_fan60j
https://kariodriscollwriter.com/wp-content/uploads/2017/08/IMG_86852B2.jpg 1600 1200 kariodriscollwriter_fan60j https://kariodriscollwriter.com/wp-content/uploads/2020/08/web-logo-Kari.png kariodriscollwriter_fan60j2017-08-08 17:41:002020-08-02 15:17:09Lopez Island Morning
1 reply