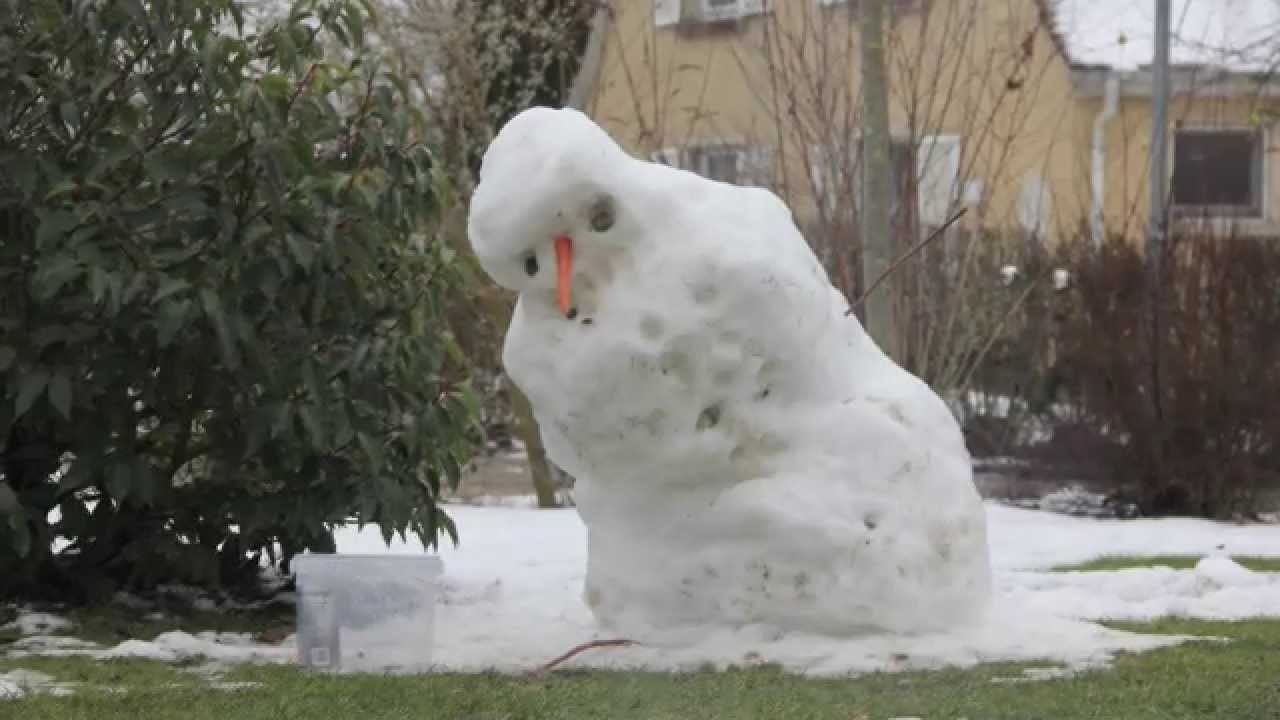 We had snow in Seattle last Wednesday. It rarely happens, and when it does, it’s a novelty and generally doesn’t last for long – just the way I like it. Thursday, the sun came out and melted most of the inch or so that had accumulated, except in the spots that remained shady. As I walked the dogs through the neighborhood, I could see some icy patches of sidewalk and a few places with snow tucked beneath branches. We rounded one corner and there stood a tilted snowman about three feet high, just beginning to melt and sag at the top. The dogs cowered behind me, tugging at the leashes to get as far away from it as they could.

It wasn’t moving or making noise. It was just sitting there, melting in the sun. And they were petrified because never before on our walk had they seen this thing in this place. It freaked them out.

I considered encouraging them to go closer and investigate – to see that it wasn’t a threat – but they would have none of it. I wish I knew what was happening in their heads – what did they think it was? What were they worried it was going to do? All they knew was that it was foreign, unexpected, and scary.

Sometimes it’s hard to argue with your instincts. Sometimes, you have to just hope that the thing you just saw that freaked you out won’t be there the next time you round that corner and try to put it out of your mind.

And sometimes, you have to creep up to it, slowly and cautiously, to check it out. You have to walk around it to see from all angles, sniff it, maybe even poke at it and try to determine what the significance is. It’s also important, while you’re doing this, to acknowledge that this takes energy – a lot more energy than walking away does. It’s frankly exhausting to stay alert and run through the mental calculations and be ready to bolt at a second’s notice.

Parenting teenagers is a lot like happening on an unexpected snowman in your neighborhood. Sometimes I just rear back and walk away from that thing that just happened, hoping it was a one-off. Other times, I steel myself and tiptoe up to assess the situation, ever-vigilant and truly hoping it’s not as frightening as I thought it was when I first saw it.

It was a week filled with snowmen. I’m tired, but also relieved that the ones I saw weren’t as bad as my nervous system said they were. And I’m also happy that I’ve spent time training myself over the years to breathe deeply and creep forward. I’ve learned that if I simply describe what I see in front of me I am suddenly less fearful.

There is this thing here that I didn’t expect and I’m not sure what to do with it. To be honest, with teenagers, it happens more than I’d like. I can’t possibly anticipate most of the things they’ll do even though I try, and sometimes I’m altogether floored.

But, as the mom, it’s my job to remember that I set the standard, and that maybe we’re all a little freaked out by this thing that happened (even if it happened as a consequence of some teenager’s poor choices). So I take a minute to let the initial adrenaline rush subside and I start talking. And usually, that snowman starts to melt in front of our eyes and become more manageable.