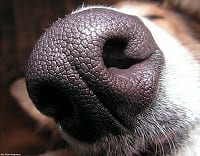 Have I mentioned that Lola is unusually perceptive? Among her most unique senses is the extraordinary sense of smell she has, which is often a trial to her. She can smell things most human beings can’t and she has a wonderful way of describing them to me – the mere mortal who doesn’t possess this ability.

This morning she informed me that every person has their own smell. This isn’t exactly a new idea, right? I can remember going in to my grandmother’s bedroom and being overwhelmed by her Estee Lauder perfume and the smell of mothballs. But what Lola is talking about is their very essence, their aura, if you will. Even if you switch from Estee Lauder to Calvin Klein’s Obsession, Lola will still suss out your scent and notice that it is the same.
“But,” she admonishes, “sometimes the smell changes a little bit. Like if you’re really upset. When Abigail is upset (Lola’s best friend) she smells a little bit sour on top of her normal sunflowers and clean laundry smell.”
Apparently the dog smells like fur and lemon kisses “which is a very good smell, almost the best,” my mother-in-law smells like light perfume and my mother has the essence of apple pie. It may sound ridiculous, but when Lola explains it, I can get the sense of it exactly. The way she experiences each of them, this is exactly what they feel like. I’m convinced she knows.
“Did Papa have his own smell, too?” I ask, hesitating. She only knew him for six years and he was pretty sick for the last year of that.
“Yup. He smelled like warm chocolate and blankets. And when he was sick it was still there, but with a little sad thrown in.”
She is absolutely right. That is what my dad smelled like as her grandfather. She is so dead-on with her assessments that I didn’t dare ask what she thinks her sister smells like. Or me, for that matter. I’m not sure I want to know…
October 7, 2010/7 Comments/by kariodriscollwriter_fan60j
https://kariodriscollwriter.com/wp-content/uploads/2010/10/Dogs_nose.jpg 156 200 kariodriscollwriter_fan60j https://kariodriscollwriter.com/wp-content/uploads/2020/08/web-logo-Kari.png kariodriscollwriter_fan60j2010-10-07 19:28:002020-08-02 18:16:16Do You Smell That?