Today I had another massage. I’ve had many between the previously volcanic one and this one, even given by men, without the same result. But this one started the same way: “Some women prefer a female masseuse. Do you have a preference?” Again, I said I didn’t. Again, I believed that statement. Barely gave it a thought. Like before, I suddenly found myself with a lump in my throat and tears threatening to spill out. Unlike before, Jose was a young, affable, easygoing guy and I felt the need to apologize for my emotions and ask him to disregard any displays of sadness on my part.

I didn’t. Instead, I lay there and wondered if the tears would fall. Or if I had come far enough that the lump would remain a lump and not morph into tears. In any case, by the time I was done wondering, Jose had begun placing eight black river rocks, flat and hot from their bath in lavender-scented oil, beneath my spine. He helped me lay back, gently exposed my legs to mid-thigh, and began massaging my calves as he palmed two more rocks.

Throughout the hour, although my eyes rested comfortably beneath a puff of lavender cloth, he made sure I knew where he was at all times. As he made his way around the room, he would gently touch one ankle or a shoulder or the top of my head with one finger: a touchstone. His shoes were soundless, as was his attire, but I was never startled at his presence.

There was something intimate and healing about experiencing the touch of a man whose only purpose was to make me feel better. The rocks were grounding, solid, weighty. They carried heat. Contained it. They imbued my muscles with their ancient solidity and Earthyness. As Jose made his way around my body, I imagined the stones as magnets, pulling electric impulses like lightning charges from the nerves and muscles – the memory cells in my body. Drawing out the electrons that shot down the well-worn pathways of remembrance. Those paths that bully me into the certainty that “victim” is a word that is as much prescient as it is historical.

Jose’s touch was gentle, professional, not at all sexual and yet it was clear that my pleasure was the object of this ritual. The restorative power of this touch, given in reverence and compassion (although Jose knew nothing of my past sexual abuse) were beyond anything I expected, and yet they were exactly what I needed. I am filled with gratitude that I have passed another healing milestone, and reminded that I need only hold my own body and mind in reverence as it heals itself in it’s own time. 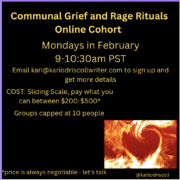 How Many Sex Offenders Live in Your Neighborhood?
9 replies