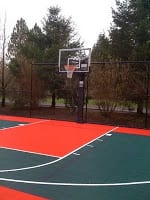 Lola decided to play lacrosse this Spring instead of softball. She has a good friend who wanted to play and there is much more movement and action in lacrosse – simply more her style. Practices are twice a week for an hour and a half and they play two games every Saturday. It’s definitely a commitment. Especially in the Pacific NW in a La Nina year. They’ve been at it since February and I think I can count on the fingers of one hand (okay, one practice) the times it has been sunny for practice. After the first week, I took to bringing an old paper bag with me when I picked her up so she could put her muddy cleats in the bag before getting into my car. By last week, I was putting a beach towel down in her seat so that her mud-splattered backside wouldn’t ruin the upholstery. And when I say “backside” I don’t mean bottom. I mean that it looks like she stood facing a wall while someone took a paintbrush dipped in mud and flung it at her body, splatter-paint-style.

She is in Heaven.

In hail, strong winds, pouring rain and, yes, even snowfall, her solid 4’3″ frame hurtles across the field, spraying wet clumps of grass behind her as she chases the ball. Without fail, halfway through practice she slows down slightly to unzip her sweatshirt, peel it off, and fling it to the sidelines because she’s sweating from the effort. A grin adorns her face for each and every one of the 90 minutes she is on that field.

Last week as I sat in the car with the heater warming my toes and my heated seat on to its full potential, I wondered whether the coaches would call practice off. The baseball and softball players had long since gone home and the black clouds had that particular electricity to them that warned of a thunderstorm. I half-wished they would call it off so I could get home and start dinner early. But in that same moment, another thought pushed that one away. The boys weren’t going home. Their lacrosse practice was still on – I could see them in the farthest field, crashing their helmets and shoulder pads into each other with abandon, the way boys in middle school do because they know they’re too young and strong to get hurt. Yes, it was wet. Yes, it was cold. But these girls weren’t in danger of suffering anything they couldn’t handle. Of the four teams of girls, only one has a female coach, and none of the coaches, regardless of gender, was about to call off practice. Whatever their reasons, I decided I didn’t care. Knowing that Lola was out there having the time of her life and receiving the message that she was strong and capable enough to practice in inclement weather was terrific.

Eve is playing basketball with her classmates this season as well. She is not much of a ‘team-sport’ kid, but when her school fielded a 5th grade team and she realized she could play with girls she knows who are her own age, she got excited. This age brings with it self-criticism and a shyness borne of comparison like no other. Among her peers is one girl who is smaller in size than Eve, several who are slightly taller or bigger, and two who could pass for 7th graders. Two have played basketball before, but the rest of them are newbies. The coach treats them all the same. She mixes up the scrimmage teams, runs drills where she stops each of them at some time to make a particular correction or explain something further, and plays with them. At the beginning of practice, held in a local community center that is usually full of older boys playing the rough, NBA-style ball, she makes sure to shoo everyone out of the gym and shut the doors before beginning practice. She gets it. But while she makes that concession for them, she is tough with them in other ways. They are not allowed to sit down for the entire practice. They can rest and take water breaks as necessary, but everyone on the team works their butt off. She makes sure they know what their bodies are capable of and shows them time and time again. Eve is so proud of her ability to do things she never thought she could. She convinced herself long ago that she is more a “creative-type” than an athlete and, while she enjoys messing around on her bike and shooting baskets in the backyard, she was fairly resigned to the fact that playing a sport on a team wasn’t for her. She’s discovering just how wrong she was about that.

In very different ways, my girls are both learning that pushing themselves in a safe environment is a powerful feeling. I am terribly grateful for coaches and organizations that provide them the opportunity to spread their wings within these comfortable boundaries. It makes me that much more committed to ensuring that girls everywhere find places like these in their lives in order to empower themselves and better understand their own abilities.

Debunking the Myth: “We Are Never Given More Than We Can Handle”

Having Too Much Fun to Blog