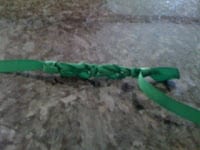 Lola is making a scarf for one of her teachers. She found some thick, alpaca yarn in our craft box one day and remembered that, once upon a time during a quiet moment in class, this teacher taught her how to finger crochet. She decided it would be cool if she put those skills to use and, after polling everyone in the house to see who could help her, she settled on me, whose yarn-craft skills are limited to, well, scarves.

She set about crocheting a long chain of warm, fuzzy wool and when she figured it was long enough, she came to me and asked how to turn the corner and double back. Tough to do when finger-crocheting. Even tougher when this seemed like good idea because it wouldn’t take long and now you’re realizing that the days are getting longer and sunnier and what you really want to do is go outside and shoot baskets instead of picking at yarn until your fingers cramp. She stuck to it for several days, though, and I was pretty excited.

This morning, she discovered a knot in her yarn. The scarf is nearly done and Lola was looking forward to being free of this task that has taken on a life of its own, so her frustration tolerance was pretty low to begin with. Monday mornings are not her strong suit, either, given that they require lots of transitions – weekend to weekday, getting dressed and eating on a schedule, deciding what to pack for lunch, ensuring that all the homework you did way back on Friday is actually complete and in your backpack, etc. So this knot was a problem. She pulled and tugged, gently at first so as not to rip out all of the stitches she has done up to this point, and then with more gusto as she realized this knot was stubborn.

In the beginning it wasn’t much of a knot and I tried to step in and caution her not to pull it tighter, but she brushed me off, determined to do it herself. I watched with mounting frustration, my bottom lip thrusting up and the corners of my mouth pulling down in that universal look of, “Oh, no!” as the knot itself became smaller and smaller and tighter and tighter. By the time she had reached the end of her patience it was in there good.

The last time I got really mad at Bubba I did the same thing. Instead of treading lightly and reaching in gently to unravel the issue, I pulled. Without yelling or screaming, I moved away from the knot because it made me uncomfortable. At the same time, I mortared my resolve to be mad by justifying my anger in my head, ticking off all of the reasons I was “right” to be upset. Tugging, tugging away at that knot. Even though I know that moving toward the issue and looking at it from all sides was the only way to undo it, I pulled away. Instead of trying to get those two opposing ends to come together and work around, under and through the problem, I cemented that knot in there.

Try it. Get a piece of string or ribbon about ten inches long and tie a loose knot in it. There is no way you’re getting that knot out by pulling the ends in opposite directions. But if you gently reach your fingers in there, between the strands, and loosen them, all the while pulling the disparate ends closer to each other, you’ll soon have your string back. Now, I know there are all types of different knots, some much more complicated than others, but I tend to think that the vast majority of trouble we get ourselves into with each other is of the garden-variety, regular old knot type. No matter how complex it seems, the best way I know to get that knot out is to move toward it with the intention of using our wits to unravel it. I’ve never met a simple knot I can undo with brute strength.

Getting Right With Me

Be Careful What You Wish For: Sleepaway Camp Revelations
5 replies