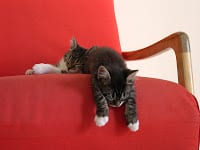 Nearly fifteen years ago, before I had children, when I was working at a job I truly loved but wasn’t sure I was smart enough to have, I had a bout of anxiety. I didn’t recognize it for what it was, maybe because of its benign beginnings.

I had an hour commute to work that I didn’t really mind. I had recently purchased my blue-collar dream car – a cherry red Ford Ranger pickup truck with a king cab and a manual transmission. I felt invincible in that thing as I sat high above all of the compact cars and listened to NPR’s Morning Edition on my way into the city. About two-thirds of the way to work I had the sinking feeling that I had left the iron on as I went out the door. I knew, despite the long round trip home, that I had to go back and check. We didn’t have any neighbors I could ask to pop in and have a look and Bubba was on a business trip. I got to work, explained the situation to my boss, and took off for home. The iron was off.
A week later, I had the same moment of panic about the toaster oven that I had used to make my breakfast. Luckily, Bubba was in town and only fifteen minutes’ drive from home so this time he could go check it out. The oven was off.
Nearly a week later again, I had the same anxious feeling as I climbed into the truck to back out of the garage. This time it caused me to stop and wonder what was going on. I was struck with the notion that I was becoming OCD. And then I realized that what I really wanted was an excuse to just stay home. Despite loving my job, I was overwhelmed by the feeling that I was “faking it” to get by and even when my co-workers and my boss praised my efforts and abilities, I felt as though I was fooling them all. I was also lonely. Bubba had begun traveling a lot for his job and I didn’t have many close friends. What I really wanted was to stay home with my cats and work in the garden and feel safe in my own space.
Since that revelation, I have had many more opportunities to understand that the things I am often afraid of are also the things I am most fervently wishing for. Not really, of course. I was relieved each and every time that the iron or the oven were off and I didn’t truly want the house to burn down, but if it had, it would have been an accident and people would have rallied around me in support.
When Bubba was sick for so many years, a horrible fantasy used to creep into my mind before I could slam the door against it that he would die on one of his business trips and not come home. I hated that thought. I hated that I was capable of thinking it and that my mind could go there. It wasn’t superstition – that if I thought it it might come true. It was the knowledge that, if he died, my fears would be validated and everyone would come to see that I hadn’t been crying, “Wolf!” when there was none there. I would have a reason to feel anxious and upset that nobody could dispute.
While I still shun those dark thoughts as quickly as they pop into my brain, I have also come to realize that they serve a vital purpose for me. Whenever I conjure up some terrible scenario of doom and gloom in secret, it is a cry for help. It is the way that my psyche lets me know that I’m feeling unsure of myself and frightened and alone. During one such time when my anxiety overwhelmed me to the point that I crawled beneath the covers and sobbed, Bubba asked me what I wanted. What I needed. The answer that came to my lips before it reached my brain was this, “I want someone to take care of me.” Nobody was more shocked than I was to discover the truth of that statement. I wanted to be cared for. I didn’t want to have to run the house, parent the children, make any important decisions. I just wanted to be. And I wanted to know that someone else was making sure things were okay in my absence. I didn’t want to have to justify it with a major illness (I fantasized about contracting horrible diseases from time to time) or a family member’s death or some other excuse for incapacitation. I just wanted to take a break from being “in charge” and “responsible” and “strong.” But I didn’t think I could.
It is still difficult for me to admit that these thoughts crop up in my brain. I’m beginning to work on allowing myself to feel overwhelmed and anxious without needing to justify it to anyone. And it’s not as though anyone has asked. Or accused me of histrionics. I think that as I become more realistic about my limits and how hard I really do work, I can prevent the need for these periodic alarm bells in my brain. It’s okay to take a day or two off. And I am not faking it. I am the real McCoy.
July 30, 2011/13 Comments/by kariodriscollwriter_fan60j
https://kariodriscollwriter.com/wp-content/uploads/2011/07/resting.jpg 150 200 kariodriscollwriter_fan60j https://kariodriscollwriter.com/wp-content/uploads/2020/08/web-logo-Kari.png kariodriscollwriter_fan60j2011-07-30 19:40:002020-08-02 18:06:33Give It a Rest!

Guilt and Judgment and Shame, Oh My!

Confessions of a Shoplifter

The Importance of Acknowledgement