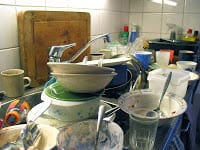 Summer is one benchmark I use to measure the girls’ development. Not only have they just completed another year of school, but they have generally grown an inch or so and matured a wee bit as well. In keeping with their gradual aging, summer is when I add another chore to their respective repertoires. I know. What a way to kill summer enthusiasm, huh? Buzzkill.

Whatever. My kids are not growing up without ever having had to lift a finger to help out around the house. And, since summer is devoid of homework, rigid bedtime schedules and sports/piano/guitar/horseback lessons, I figure they have all the time in the world to master this new skill, right? Usually when I introduce another chore I simply explain it, model it, tell them my expectations for how often it needs to be done, and consider it done. Given that they are already responsible for feeding the pets, taking out the garbage/recycle/compost, folding the laundry, and setting and clearing the dinner table, I was working a bit to come up with new chores. So I asked them what they thought. Suckers.
Eve decided she would like to try doing the dinner dishes.
Lola said laundry.
The month of July was reserved for housework immersion summer camp. Mama-style. The first night, I showed Eve my method for rinsing the dishes, stacking them in the dishwasher, separating the hand-wash only things out and scrubbing and rinsing them, and wiping down the counters. She was also responsible for emptying the dishwasher in the morning and putting everything away. Unfortunately for her, I love cooking and cook dinner at home from scratch nearly every night.
Lola was schooled on how to separate delicates from colors from linens from whites from handwashables and how to put each of these groups of laundry through the washer and dryer. Suspiciously, our dry cleaning bill skyrocketed in July when Bubba learned who would be responsible for caring for his work clothes.
My plan was to have the girls be solely responsible for these two tasks during the month of July. In August, they had Harry Potter camp and we were out of town for a week, so we would have to play it by ear. As soon as school started, they would only be responsible for these tasks on the weekends, leaving their weeknights free for practices and homework and family time.
Can I just say that I was terribly relieved when August 1 came? It was all I could do not to look over the girls’ shoulders and chew on my bottom lip. I offered Eve advice when it seemed as though she was rinsing more than necessary or if there was a more efficient way to get things done, but she would have none of it. I don’t blame her. I had to remind myself that she would learn more if she made her own mistakes. I wasn’t willing to let Lola make mistakes with my clothes, though, so I gave a bit more input there. Still, their timelines weren’t the same as mine.
Eve knew she had to clean the kitchen as soon as dinner was over. The problem came the following morning. Lola and I get up at the crack of dawn and my routine is to come downstairs, empty the dishwasher, make my latte and read the news. Eve discovered the joy of sleeping in this summer which meant that the dishwasher often didn’t get emptied until well after Lola and I had eaten breakfast. Which meant dirty dishes stacked in the sink. Waiting for Eve to get out of bed. Driving me nuts. Every day.
Lola’s job was much more cyclical. Not having my perspective and ability to look ahead and anticipate who would run out of underwear when or need to wear her “favorite skirt,” she quickly fell into a habit of only doing laundry when I told her to. Despite my continued warnings, she often started a load of wash and left it in there to molder for a few hours before remembering it needed to go in the dryer. She eschewed the laundry basket, preferring instead to gather up as many of the warm, dry clothes as she could in her (short, 9-year-old) arms and carry them to the couch, leaving a trail of clean items behind her in the dog and cat-hair tumbleweeds on the floor in the hall.
I spent far too much time ruminating on my frustrations – trying desperately to recall how I learned to do dishes and laundry the way I do them. I know for a fact that my mother would accept no jobs half-done, but I can’t recall any specific lessons on how to do things the way she wanted. I resigned myself to letting the girls work out their own systems and, by the end of the month, they had both learned some valuable lessons about how to be more efficient with their respective chores. That being said, on August 1st, it was an enormous relief to get back to doing the dinner dishes my own way. As for the laundry, Bubba has mysteriously decided that his clothes are safe to be washed at home once again. It was not all in vain though. At one point Eve said to me (her arms up to the elbow in dishsoapy water), “Mom, this is a lot of work. Every night after dinner, I’ll rinse my own plate and put it in the dishwasher for you. I promise.”
I’d like to say Lola had a similar revelation, but since her laundry accounts for the smallest portion in the house – given that she thinks being clean is vastly over-rated – and the fact that running large machinery combined with pouring chemicals is a dream generally reserved for her sleeping hours, she won’t likely come up with any gems. She is still more than willing to drop a load of laundry in the washer or dryer for me at my request.
Overall, it was a good experiment and it’s nice to know I can rely on the girls to help out when asked, but I am more than a little embarrassed to say that I don’t relish giving up my dominion over the kitchen or the laundry room again anytime soon.
September 11, 2011/4 Comments/by kariodriscollwriter_fan60j
https://kariodriscollwriter.com/wp-content/uploads/2011/09/dishes.jpg 150 200 kariodriscollwriter_fan60j https://kariodriscollwriter.com/wp-content/uploads/2020/08/web-logo-Kari.png kariodriscollwriter_fan60j2011-09-11 00:43:002020-08-02 18:05:25Mama’s Summer Camp

Talking To Kids About Sex (With Visual Aids)