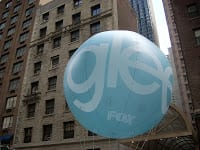 My girls have reached the “musical” stage of their childhood. Eve got to go see “Oliver!” last year with her class and she came home singing all of the songs and begged me to get the music. Lola’s music teacher taught them most of the songs from “The Sound of Music” last year and she went around singing them until I thought I’d throw up. Repetition aside (or maybe repetition-inspired), I decided to expand their repertoire by finding some more musical soundtracks to introduce them to.

“Annie?” Check.
“Mamma Mia?” Check.
“Grease?” Triple check.
I loved that movie. It came out in 1978 and I must have been too young to see it in the theater, but I watched it a dozen times as an adolescent (we weren’t delineated into teens and tweens back then, of course). I saved my money and bought the album as soon as I could and I listened to it over and over again. In fact, I’m fairly certain that green cover with the photo of Olivia Newton-John and John Travolta sat empty in my cupboard for a long time since the record rarely came off of my record player. Twenty-five years later I still remember all of the words to all of the songs and just hearing them conjures up images of Frenchie’s pink hair and Rizzo dancing in her underwear at the slumber party as she sang “Sandra Dee.”
My girls quickly fell in love with the music to “Grease” too. And it wasn’t long before they began asking to watch the movie.
Gulp.
Eva is nearly twelve and Lola just turned nine. Are they too young? I don’t honestly remember how old I was when I first saw “Grease,” but I know that some of the concepts are pretty grown up. Even some of the song lyrics are a little edgy – “…I’m Sandra Dee, lousy with virginity.” (Mom, what’s ‘virginity?’ I can imagine Lola asking.) The boys singing “Greased Lightning” and talking about the girls “creaming their pants.” Hmmm.
I don’t recall my reaction when I heard lines like that in the movie. I know there isn’t any sex or nudity and, other than the sexual inferences and stereotypical bad behavior from teens, I don’t think there is anything objectionable. But do I want to be responsible for my girls learning concepts like “creaming your pants?” Of course, the cat’s out of the bag for a lot of it if they slow down and really listen to the song lyrics. And they already listen to a lot of music with words I don’t allow them to say – heck, even the Indigo Girls drop the f-bomb here and there.
I’m stuck wondering whether I want to let them see me squirm and, thus, set them up to pay closer attention to the movie, wondering what it is that I’m worried about. Maybe they will watch the movie, absorb the parts they care about and are developmentally able to, and chuck the rest, only realizing what was really going on sometime about the age of 20.
Eve has been pressuring me to let her watch “Glee” since most of her friends and classmates watch it and love it. It’s not that I won’t let her, but it isn’t a show I watch, so it doesn’t occur to me to record it and even see if it is okay. And then there is the logistical issue of how to let Eve watch something that Lola isn’t allowed to. Don’t get me started on that.
I suppose the worst that could happen is that they bump up against a concept they are unfamiliar with or one that makes them uncomfortable and we have to talk about it. I’m more than happy to do that, although Lola has been teasing me lately about giving her “too much information.” In my defense, the questions she asks are getting more complex. “What’s a foster home?” “Why are there so many homeless people?” “Why is Eve so cranky all the time?”