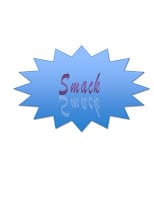 It’s the same reason I chose not to spank my kids. Fear is a powerful motivator, yes. But the only thing I’ve ever seen it motivate anyone to do is hide. Hide their intentions. Hide their actions. Hide their plans. And in my house, growing up, spanking was used as a tool for control because it inspired fear. “Do you want a spanking?” Heck, no! So we learned to lie. We learned to behave a little better, too, but it certainly didn’t teach us right from wrong. We learned avoidance.

When Bubba and I decided, very intentionally, to get pregnant, I voiced my very strong opinion against spanking. At the time, it was naive and optimistic and borne out of my pacifist ideals. Later, when Eve would get willful or fight against napping, and when she was two and her favorite philosophical position was, “NO!” it became a question. Why can’t I spank her? Why did I think this was a bad idea? And it prompted some mental exploration on my part.
My knee-jerk reaction was that hitting another being was wrong. Period. Wrong with a capital-W. Why? Recalling my experiences with spanking, for myself and my siblings flooded my senses with fear. I don’t want my child to be afraid of me. But it was more than that. Each and every time I was spanked, it came from a place of anger. My parents were furious with me and they showed it. In some cases, that anger was nearly out of control, and it was always palpable. As a child, I vowed (for many reasons) never to be out of control. Responding to my child, or anyone else for that matter, in extreme anger, rage, or frustration was frightening to me.
I learned to step back. I learned that it is perfectly acceptable to take a time-out and breathe and consider my options. I learned that automatic consequences that were borne of rage tended to be overblown and out of proportion and they generally were incapable of being carried out: “No TV until you’re 16, young lady!” I also learned that as I took time to consider my options, I could learn a little bit about the situation and gain insights that I hadn’t noted previously. Unless I chose to hang on to the anger and let it simmer. In which case it turned to score-settling and revenge-seeking.
I remember exactly where I was on September 11, 2001. I awoke to the phone ringing and answered to hear my father-in-law’s voice telling me to turn on the television. He was rattled and I sat riveted to the news reports all morning, eighteen-month-old Eve strapped into the Baby Bjorn on my chest. I was overwhelmed with sadness. I was also confused and a little bit frightened. And since that day, our lives have changed a lot as Americans. And I completely understand the anger and hatred and rage directed at Al-Qaida and Osama bin Laden. But I don’t think his death will change anything.
Watching the news coverage last night, I took in the sight of the growing crowd in front of the White House as they chanted and held up signs. I acknowledged the notion that this provides closure for a lot of people. And I was saddened that, for many individuals, the over-riding sense was that a score had been settled. I can honestly say that I don’t think acts based in anger or rage or vengeance can ever “end” a feud. I have never seen an argument settled when the last word spoken was out of hatred. Osama bin Laden may have masterminded some atrocious acts in his life, but his death will only add fuel to the fire for those who believed in his brand of terrorism. This is not a game of Chess. Osama was not the opponent’s king who, once cleared from the board, signals the end of the match. There are no “fair” rulings here. I am not saying that a just punishment for Osama bin Laden is not warranted. I am simply saying that to take joy in the death of someone else cannot provide any sort of healing for anyone.
I am certain that my parents don’t wish they had spanked us more as children or reacted in anger more often. I know that, these days, when Eve and Lola ask my mother if she really used to spank us with a wooden spoon, she cringes. I’m pretty sure I know what that means.
May 2, 2011/9 Comments/by kariodriscollwriter_fan60j
https://kariodriscollwriter.com/wp-content/uploads/2011/05/smack.jpg 200 154 kariodriscollwriter_fan60j https://kariodriscollwriter.com/wp-content/uploads/2020/08/web-logo-Kari.png kariodriscollwriter_fan60j2011-05-02 20:36:002020-08-02 18:09:57Why I Can’t Be Happy About Osama’s Death

Choosing My Own Memories
9 replies