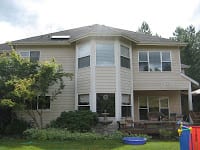 “Even on the most exalted throne in the world, we are only sitting on our own rear end.” Michel de Montaigne

And I want my rear end to be in a comfortable place. It doesn’t have to be exalted or even fancy, but I want to feel at home. And this house-hunting is exhausting. A few weeks ago I thought I had found IT. The One. My realtor and I walked through the house almost silently, reverently, neither of us willing to break the spell by speaking. The kitchen was a dream. The family room opened just off of it and the back of the house was lined with eight french doors leading out onto a private patio. The bedrooms were big for a house in the city and there was a basement complete with storage and carpet and an updated laundry room. There was light and a gorgeous gas fireplace and a big porch with a swing. I felt cocooned. Cozy. Comfortable. I felt at home. I could imagine us living in this house.

Until I stepped outside. I am not terribly familiar with the neighborhood and there is a busy street half a block away. The back yard is bordered by one of those pockmarked alleyways that some of the neighbors take care of and others disregard. Fine. I just stepped back inside. Ahhh. That’s better.

I arranged for Bubba and the girls to come look at the house that weekend with me. It was a sunny Saturday afternoon and the girls happily skipped through the house, imagining their bedrooms and spaces to hang out. Bubba was more reserved, knowing how I felt about the house, and he was determined to look in every nook and cranny. He took his time strolling through every room, opening drawers and looking behind furniture, taking photos and not saying a word.

After about an hour inside the house, we took the girls on a walk through the neighborhood, noting the local cafe and two schools within walking distance. I was nearly afraid to breathe, not wanting to influence Bubba or the girls, although the girls were already sold. They’re fickle.

It was nearly two hours later, as we were back in our house, that Bubba dared to ask me whether I still loved the house. I had a hard time answering. I wanted him to give me a definitive opinion that would then inform my feelings. If he hated it, I could give up. If he was head-over-heels, we could celebrate and I could put my misgivings to rest. Oops, I just admitted I had misgivings.

The fact is, I could imagine living in that house. Entertaining in that house. Raising our kids in that house. Hosting family in that house. But I was stuck on what it felt like to be outside. The neighborhood behind and to the north is great – tree-lined sidewalks, lots of families. But the street that the house was on was busy and only half a block long before it dumped out onto a four-lane road complete with stoplights. Could I live in a neighborhood that attached to the back of my home?

Ultimately, Bubba and I decided to wait and see what else comes on the market. I knew it was the right thing to do, but I still felt unsettled. It took me a few days to figure out why.

I want to be done. I want to know where I’m going to live come July. I want to picture it in my head and decorate it a thousand times in my mind before we ever move. I want to start boxing things up in this house and make a list of furniture to sell that won’t fit in the new house. I want to feel settled.

The realtor and I went out again today and, while I know she isn’t trying to pressure me, she told me that with Spring approaching, houses are flying off the market, being snatched up within days of going on. I know this, having watched two potential houses I wanted to see come and go before we could schedule appointments to see them. We went to see two houses today, both in neighborhoods I know well that I know we would like to live in. I woke up with a smile, feeling optimistic that today would be the day we would see something great. Lest you laugh too loudly, can I tell you that we’ve been at this since October, looking three out of every four weeks in a month? We have kissed a lot of toads so far. More than I can say.

The first house was creepy for reasons I can’t properly explain. It had a very strange vibe, not exclusively due to the deadbolt on the outside of two closet doors and the laundry room door. (Why would you lock someone in the laundry room?) We couldn’t get out of that house fast enough.

I wanted to like the second one. It is in a terrific neighborhood. It has a backyard. It’s not even officially on the market yet – a girlfriend of mine knows the agent. It is in our price range. It’s Bubba’s choice of neighborhoods.
The ground floor was lovely. Not perfect, but lovely. The upstairs? A great master suite and three itsy, bitsy, teeny, tiny bedrooms (one with only room for a crib and a rocking chair and a changing table). The realtor started on about knocking down walls and expanding things and putting in a murphy bed for guests and I tried to follow her. I really did. I wanted to think that these things are no big deal and simple and “just sheetrock.”
So I’ll bring Bubba and the girls to see it on Saturday. It’s a shame to let a house this close to great in such a great neighborhood go without a second look. Or is it? I don’t know if it’s crazy to expect perfection, but I want to know that The House is out there somewhere and I’ll find it. I’m willing to keep kissing toads as long as I know that when I need it, one of them will spring to life as a cozy home in a friendly neighborhood that won’t require me to bring an architect or a plumber along.
In the meantime, I guess I’ll just keep resting my rear end on this throne I’ve got and hoping the toads keep presenting themselves.
February 29, 2012/6 Comments/by kariodriscollwriter_fan60j
https://kariodriscollwriter.com/wp-content/uploads/2012/02/IMG_6241.jpg 150 200 kariodriscollwriter_fan60j https://kariodriscollwriter.com/wp-content/uploads/2020/08/web-logo-Kari.png kariodriscollwriter_fan60j2012-02-29 01:24:002020-08-02 17:59:11House Hunting is Hard Work