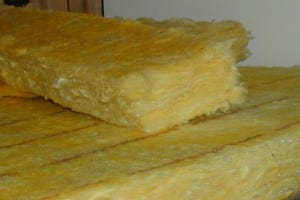 Moving to the city has been a form of insulation-removal for us.  It occurred to me this morning as I walked the dog through our new neighborhood, as has become our morning ritual, that I have lived in the suburbs my entire life.  Or, if not technically in the suburbs, in a small enough town that I had no idea what living in the city would be like.  And Bubba, well he was born and raised in the same house on a few hundred acres bordering a wide river with nothing but cattle and sugar beets for neighbors.

Our new house, while spacious and definitely in a residential neighborhood, is not insulated.  I don’t mean it lacks that fluffy pink fiber stuffed in to the walls and attic. I mean that if we leave the back doors open on a sunny afternoon we have to be careful not to crank the music too high because the neighbors might be having dinner on their patio next door.  I mean that four doors down is an old Victorian that has been converted into four apartments and across the street is a 60-something Caucasian woman who is ragged raising her daughter’s two half-black sons by herself. I mean that our front lawn is seen by dozens of people each day, some strolling by slowly with dogs of all sizes and others rushing to catch a bus a few blocks south, ears sprouting speakers or bluetooth devices.

In every other house I have inhabited, the front lawn might be a playspace for children or pets, but mostly it served as a buffer. A way to set the house back from the street and give us some space. Some insulation. On our quiet cul-de-sac, nobody ever saw our front lawn except the neighbors.

In the suburbs the grocery stores were not walking distance away and so each had spacious parking lots, landscaped with trees and shrubs and, in some cases, herbs and other edibles.  Each car had its own ample space. A separation from the others.  Here in town if there is a parking lot at the store it is nominal with no room for plants beyond the occasional weed poking up through a crack.

Since we moved I have noticed more. More people close by. More noises. More light. More life.  At times I have found myself uncomfortable with the lack of insulation as though I’m sitting outside on a cool evening in just a tank top. The activity around me, the closeness of others not just like me – they act as a cold breeze raising goosebumps on my arms.  This heightened awareness is disconcerting but electric all the same.  I feel more aware. More exposed. More available to everything.

For most of my life I have been able to surround myself with open space and a cushion of comfort. Our previous neighborhoods were quiet and serene. If we wanted action we could go find it. If we visited the city for a day to attend a cultural event we could come right back home and lament the sad spectacle of dirty streets and panhandlers and crowds in the cocoon of our home.  We could remove ourselves.  Insulate ourselves.

In our new house we certainly are able to come inside and close the doors, retreat to the basement and watch TV in peace if we so choose.  I can curl up on the couch with a book and delve in to a different world.  But the buffer around us has been pared down.  Our neighbors are closer and more diverse than anywhere I’ve ever lived.  It took the dog a few weeks to figure out that every car or truck that came down the street was not stopping at our house. He barked excitedly at the door every time someone walked by on the sidewalk or drove past the backyard through the alley, certain they were coming to visit us.  I know how he feels.

And yet, I am so grateful for this shift in my life.  The opportunity to take a step closer to life in the city is keeping me on edge in a good way.  In the past I was able to convince myself that distance was normal. That I could retreat from my surroundings with a wide cushion around me and venture out on my own terms. The suburbs gave me the impression that control was possible. No massive tree roots were allowed to push their way up, tenting sidewalks to dangerous heights.  You could always tell what day the garbage pick-up happened because house after house sported the green and blue plastic bins at the end of the driveway. Neighborhoods with single-family homes sat apart from those with condominiums and apartments.  Here in the city our mantra has become, “Watch your step” as we take a family walk with the dog. When I asked the former owners what day garbage and recycle service came they looked blank despite having lived here for five years. The trash bins simply live in the alley behind the house where the massive trucks rumble through once a week or so. There are renters and ‘owners’ alike in our neighborhood in the city and many homes with multiple generations living within.

While it remains true that I dip a toe in the water only when I choose, the world is closer now and, for me, that is a reminder that life is meant to be tasted and experienced.  That the bright colors and sharp noises of the city represent a brighter mosaic that I have decided to be more fully a part of.  The chaos and disorder of old next to new, wild bumping right up against sculpted, tribal music in the park as I lie quietly reading on a blanket gives me a new sense of imbalance that feels a little alarming. A little sensory-overload. A little like a really good scalp massage that takes me by surprise and sends shivers down my back but wakes me up and leaves me wanting more. 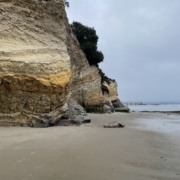