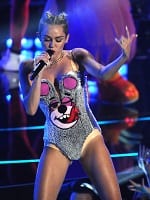 Somehow, the topic of Miley Cyrus came up in our house a few weeks ago. Yes, before the MTV Video Music Awards and Miley’s latest public appearance.

My girls are just old enough that they used to really enjoy watching “Hannah Montana” and Bubba and I used to be forced to listen to them sing her songs over and over again.  It has been a few years since that show has appeared on our television – Lola prefers ‘Seinfeld’ and ‘The Simpsons’ and Eve is a total ‘Pretty Little Liars’ fan – and neither of the girls owns any of Cyrus’ new music that I know of.  It is, however, nearly impossible to miss the tabloid headlines and magazine photos of her with her partially-shaved, blond-dyed hair and new, much edgier look.

When we started the conversation, I encouraged the girls to say what they thought about her and both gave me some version of the statement “she isn’t classy.”  I have to say that I agreed, but I did manage to paraphrase this quote from her that I admired:

“People think that I was made in Burbank in the Disney building.”

When Kelly Osbourne asked her about her transition from childhood to adulthood as a celebrity, she answered,

“It’s called puberty….Everyone’s done it from the beginning of time. I’m just doing it, so you’re zooming in on it and you’re fascinated by it.”

The reason I held that up for my girls to think about is because I think she has a valid point.  Some teens go through a period of major rebellion and others stay pretty much the same as they always were. Some manage to hide their testing behaviors pretty well from their parents and others don’t.  Miley Cyrus ought not to be expected to stay the same innocent (if she really was that innocent – hard to know since I don’t know her personally) young girl she portrayed on television any more than anyone else.  She is growing up. She is allowed to get a tattoo or shave her head or sleep with whomever she pleases, whether or not we like it.  Whether or not we find it uncomfortable to look at.

I think it is patently unfair to so closely scrutinize Miley Cyrus for daring to take some chances with her physical appearance as a young twenty-something.  She is playing with her own boundaries, something she is absolutely entitled to do so long as she isn’t hurting anyone else or endangering herself in any way.  If she were anorexic or playing fast and loose with drugs and alcohol, that might be another situation, but still not one that’s any of my business and I would hope that her family and close friends would step in and try to help.

Of course, when the VMAs rolled around, I was shocked at the amount of disgust and disdain shown for her performance. Granted, I didn’t watch the entire thing (too busy catching up on ‘Breaking Bad’), but from the description of her stripping down to flesh-colored bikini and bra and incredibly suggestive dancing with Robin Thicke, I didn’t see anything that was much different than past performances from Madonna or Katy Perry or Britney Spears or even Lady Gaga.  Why the backlash against Cyrus? Is it because we all still want to see her as Hannah Montana? Are we uncomfortable with her growing up before our very eyes?  Frankly, I am far more disgusted by the lyrics to Thicke’s song “Blurred Lines” and its nod to the idea that women don’t actually know what they want when it comes to sex and they need men to give them guidance than I am by the idea that Miley gyrated her hips against his crotch on stage.  I’ve seen far worse. She was called out for grabbing her own crotch. Huh. How many male pop and hip hop stars do that almost constantly? When was the last time they were admonished for that kind of behavior?

So when the conversation came up again today and the girls had heard much of the discussion of her performance (neither of them has seen the broadcast of the VMAs), I was careful to ask for their perceptions first again.  They both felt like she was still “not very classy,” but Lola pointed out that she really felt a little sad.

“She has such a good voice and it’s too bad that these kinds of things take away from the attention on that.”

I think she’s right.  I say that, if Miley isn’t hurting anyone or exploiting anyone with her behaviors, we ought to leave her alone.  She may be making some decisions that will come back to haunt her in the future, given that these photos and recordings will likely never go away, but their her choices to make and unless her actions or words are harmful to anyone else, she has every right to do what she thinks is right.  I have seen some essays discussing her ‘appropriation’ and ‘exploitation’ of black culture and I honestly don’t feel like I can speak to that with any authority at all, so I’ll leave that to others.  Ultimately, I wonder if a lot of the public outcry over her VMA performance has more to do with the fact that Hannah Montana isn’t growing up to be the young woman many people expected her to be.  I don’t think we have any right to impose our society’s ideas on her simply because she was famous as a child.

One Billion Rising (and One Writing)

Why Gloria Steinem is Still My Hero

If You’re Gonna Use Barbie, Why Not Go All the Way?

Divorce is Not a Dirty Word
4 replies