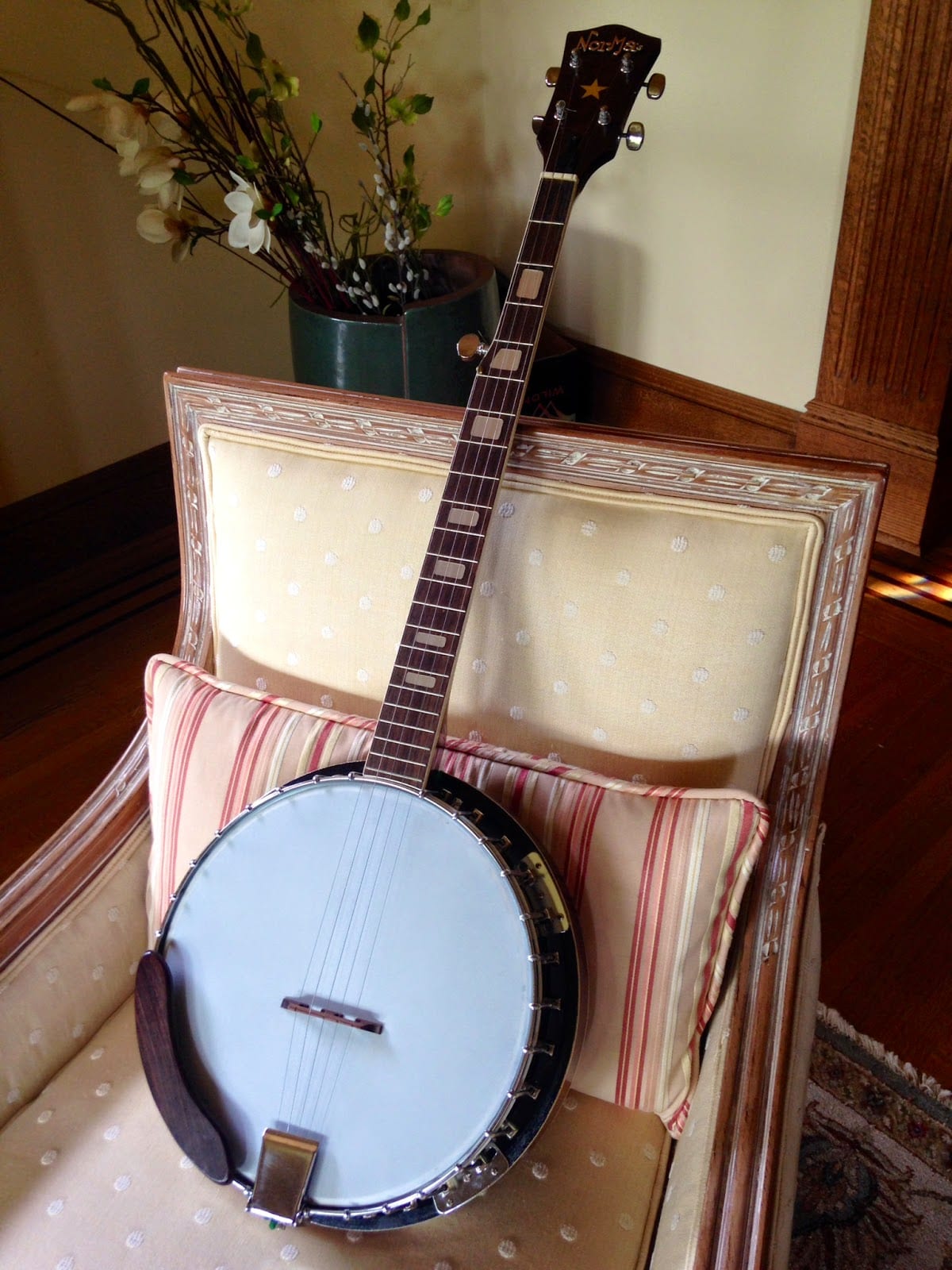 This banjo is sitting in the corner of my living room. For the first few weeks it was here, it sat inside its case because I wanted to make sure my head and heart were clear when I finally opened it up.  It belonged to my dad, and even though he died nearly six years ago, his wife only recently began packing up his things and figuring out what to do with them. She knew I wanted the banjo, but she couldn’t find it in any of the places she expected it to be and then one day, as she lie on her bedroom floor fishing underneath the bed for a roll of Christmas wrap, her fingers bumped up against the black faux-leather case.

I brought it home, having only unzipped the case once or twice to peek inside and marvel at its pristine condition (although I shouldn’t have, my dad was a Marine in every sense and took impeccable care of his things).  When I finally sat down in the living room to take it out all the way – Bubba off on a business trip and the girls away at school for the day, weak February sunshine filtering through the leaded glass windows – time stopped.  I don’t remember hearing anything from inside or outside the house; no dogs barking or airplanes soaring by, no hum of the refrigerator or the dryer. Of course, that is impossible, but I felt weighty and deliberate as I gently lifted it out by the neck and the body, careful not to smear fingerprints on the shiny chrome or twang one of the strings and break the spell.  Nestled beneath the banjo itself was a songbook and instructional manual by Pete Seeger and I nearly cried out when I saw it. Dad was a huge folk music fan. We grew up listening to the Kingston Trio and The Mamas and the Papas and Dad, while he couldn’t read a note of music, could hear a song once or twice and pick it out on the banjo or the guitar or the piano.  I don’t recall how often it happened, but I have fond memories of sitting cross-legged in the living room in a small circle with my sister and brothers while Dad taught us “Froggie Went-A-Courtin'” and “Greensleeves” and we had sing-a-longs.  I remember his long freckled fingers with the ridged nails and knobby knuckles picking and bending the strings in perfect time as our little troupe swayed back and forth singing with great gusto.

Laying the banjo across the couch cushions, I picked up the songbook and flipped through, hoping for some handwritten evidence of Dad somewhere within. His distinctive scrawl, always in pencil, shaped by the tremor in his hands, didn’t show up anywhere.  I was deflated.  I think I was looking for some message from beyond.

In the months since that day, I have walked by the banjo many times as it sits propped up in a box in the corner, neglected. I would love to learn how to play and have often thought about picking up that instruction book to give it a shot, but I’m both afraid and intrigued by what the music would do to me, what doors it might open if I do, indeed, figure out how to strum that banjo to play the folk songs of my childhood.  Occasionally as I walk past, I can smell the scent of cherry tobacco that came from Dad’s pipe and I am suddenly in the middle of that living room with the green shag carpet and the gold velour couch and swivel chair, Dad leaning back with the newspaper and the pipe smoke wafting gently to the flecked ceiling. My thoughts drift to the brother we lost during that time and I quickly shut the door of my mind.

Last Friday, Bubba and I took the girls out for dinner to a place in our neighborhood we’ve never been before. As we sat and waited to order, I became aware of the music playing and my heart swelled.  Throughout our fantastic meal, an entire Jim Croce album played, each song in the order I remember: Time in a Bottle, Operator (That’s Not the Way it Feels), Rapid Roy (The Stock Car Boy), Bad Bad Leroy Brown, You Don’t Mess Around With Jim, One Less Set of Footsteps, I’ll Have to Say I Love You in a Song.  The girls kept getting annoyed with me, alternately because I was singing along with the songs and because I got lost in my reverie and dropped the thread of our conversation.  I know they don’t understand the pull of this music for me and the melancholy memories, but it was such a lovely warm feeling to be surrounded by Dad, laughing at the absurdity and playfulness of some of the lyrics as well as the innocence and sweetness.

Even though Dad was not a musician by trade, nor would he ever have considered that a possible career, one of his purest joys was music and it was often the one thing that we could all agree on.  The soundtrack to our summer road trips featured folk artists as well as popular music from The Doobie Brothers and The Little River Band (Dad was not a Beatles fan at all). More often than not, we would pop in an 8-track, roll all the windows down and sing together in what we thought was perfect harmony. And it turns out, it was.

The Doors: Then and Now