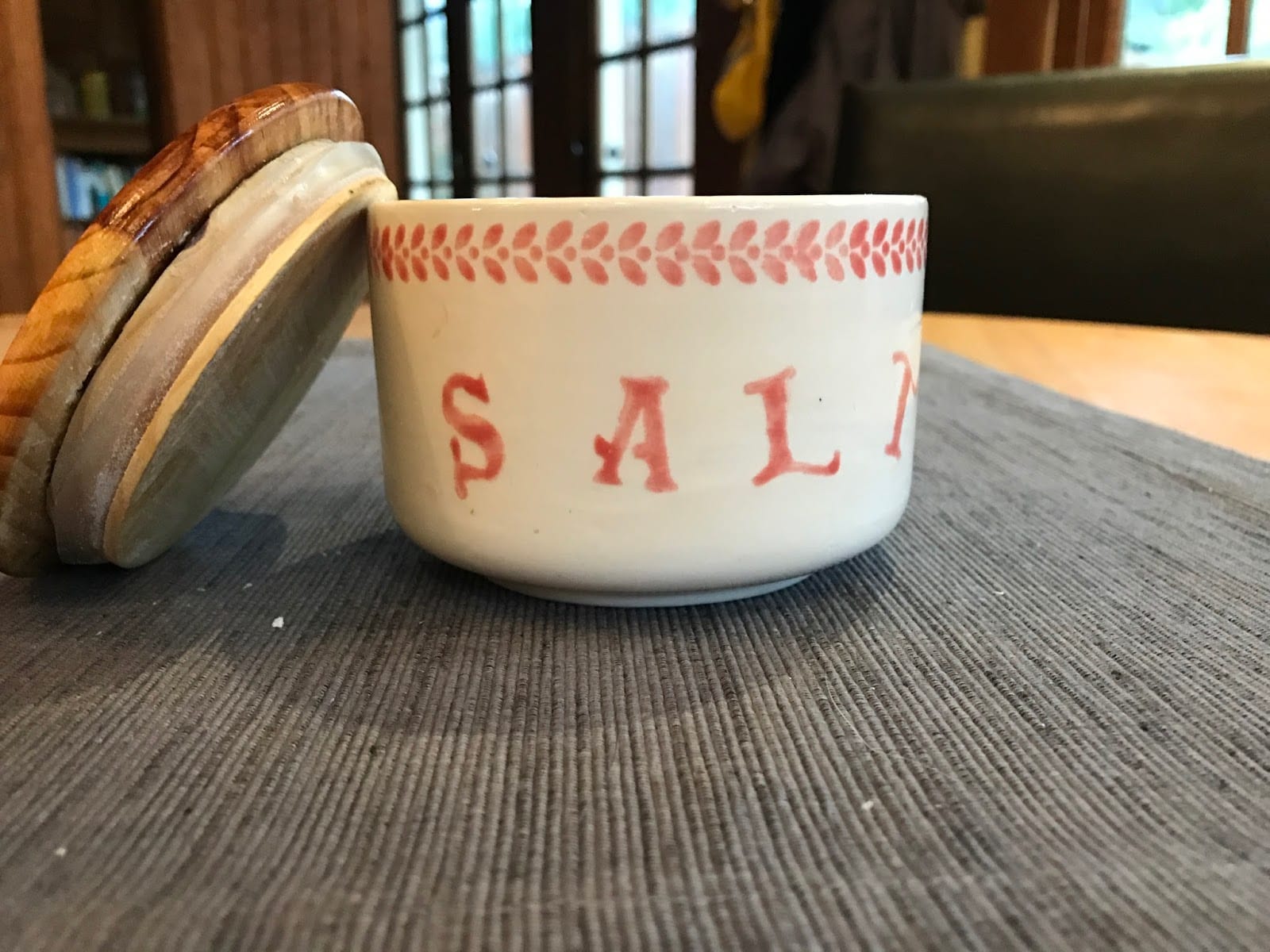 I fixed the salt cellar this morning. It wasn’t terribly
complicated, but it took a little bit of ingenuity and some focus and a real
desire to have it fixed. I made it last year at one of those paint-your-own-ceramic
workshops. Eve and I were having a mom-daughter day and I decided the last
thing our cupboards needed was another coffee mug, so I chose this ceramic salt
container with a rubber flange on the lid to keep it air tight and Eve pronounced it “cute,” which is an enormous compliment coming from a 16-year old
girl who is your daughter.
It lasted about a week
before the wooden lid came loose from the part with the rubber seal and Lola decided shove it farther down inside rather than trying to pry it loose. This
resulted in the container being full of salt beneath part of the lid that was
firmly stuck halfway down, and no way to remove it. We left it like that for
months, filling the upper part of the container with salt and calling it good.
But this morning as I
stood over a pan of hash browns, imagining what it is going to be like to pack
Mom’s stuff up and move her to memory care in the next week or so, I took on a
project I thought I could fix. As tears tracked slowly down my cheeks, I
contemplated what it would take to pry the lid out. I started by running a
sharp knife around the edge of the rubber, hoping to ease it loose, but abandoned
that after imagining the knife slipping out and slicing my finger. Next, I got
a corkscrew and tried to drive it into the center of the wood to get ahold of
it and lift up, but the wood was too dense. When I went to the junk drawer to
get a screwdriver and screw, I heard Dad’s voice in my head, telling me this
was the ticket.
I screwed it in until
it just took hold and then grabbed the vice grips, stopping for a second to
wonder how many other households have a pair of vice grips in the kitchen drawer
and mentally patting myself on the back for my cleverness. I clamped them over
the top of the screw and gently rocked the vice grips back and forth until the
lid slid up and out.
I flipped Eve’s hash
browns to crisp up on the other side, put the tools away and grabbed the
superglue. Within minutes, the potatoes were on a plate and the two halves of
the lid were tightly bonded back together. I washed out the salt cellar, refilled
it with fresh salt, and wiped down the counter.
When Eve came in to
eat, she opened it up, pinched out a bit of salt, and sprinkled it on her
potatoes. She didn’t even notice that it was fixed. Par for the course with a
teenager in the morning, I suppose, but it didn’t diminish either my sense of
pride or the immense feeling of relief I had that I had found something I could
accomplish today.
March 15, 2017/2 Comments/by kariodriscollwriter_fan60j
https://kariodriscollwriter.com/wp-content/uploads/2017/03/IMG_8163.jpg 1200 1600 kariodriscollwriter_fan60j https://kariodriscollwriter.com/wp-content/uploads/2020/08/web-logo-Kari.png kariodriscollwriter_fan60j2017-03-15 16:37:002020-08-02 15:19:08Fixing What I Can

Hangin’ in the Kitchen with Lola

The Fallacy of Belonging
2 replies