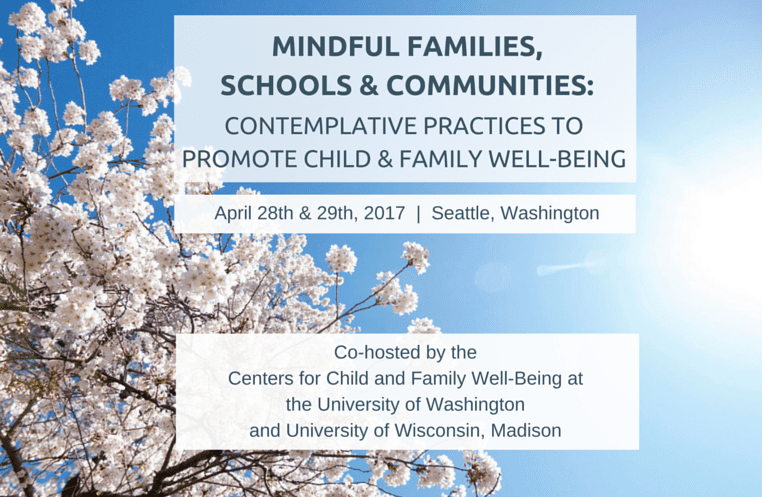 I spent the last two days at a Mindfulness Research Conference and my brain is full. I dreamt about mindfulness last night. Don’t ask me to describe it because it doesn’t make much sense, but trust me when I say it will be several days before all of the information I received filters down through the recesses of my brain and begins to create a clear picture. I was left with a tremendous sense of gratitude for all of the people who are doing such good work to uncover which practices and paradigms are the most effective. People doing work on a shoestring budget in the face of resistance to the idea that this is a science, in the face of challenges like racism and ablism and a culture that doesn’t embrace relationships between people as much as it embraces the power of money. More than once, I found myself breaking out in goosebumps as I listened to these brilliant, fierce, heart-centered folks present their work. Whew.

When I took the pups for a walk this morning before most of the rest of the neighborhood woke up, I had ample opportunity to quietly reflect on the last two days. I set out with the intention of simply paying attention to my surroundings, appreciating the flowers in my neighbors’ yards, the smell of the air after a hard rain last night, the sound of the birds talking to each other and their babies. It wasn’t long before I was distracted, however, which is akin to what happens sometimes when I sit down to meditate. Some people call it ‘monkey mind,’ but in this case, it was puppy mind. The dogs were pulling me in two different directions, each of them intent on tasting whatever they could – small sticks, bits of gravel, discarded wrappers and chewing gum they discovered on the ground. Over and over again, I tugged one back toward me with a harsh Leave It! I nearly laughed out loud when I realized that this is what I do to myself when my thoughts stray during meditation and I resolved to be more gentle. These puppies are doing what comes naturally to them – exploring their world with their mouths. Anger won’t change that. I can be more gentle in redirecting them (and simultaneously look forward to the day when I can take them for a walk and they will lift their heads up and look forward and walk smoothly instead of letting their noses lead the way in some winding treat scavenger hunt). 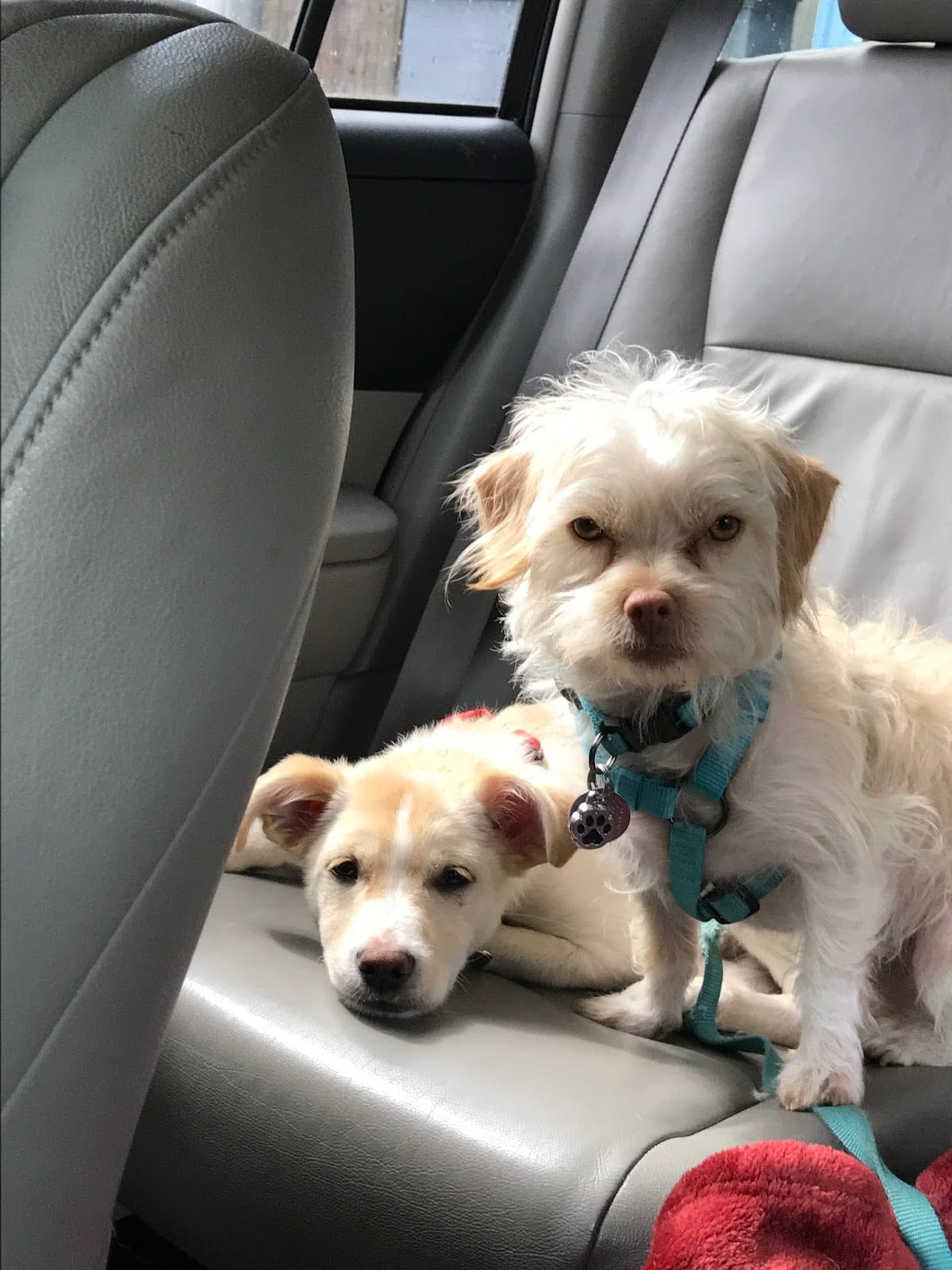 The actual events of the walk did not change with this realization, but my response did.

This is mindfulness. The recognition that there is a stimulus-response occurring and that I have the power to stretch out that hyphen between them, reflect on it a bit, and change the response to one that is more purposeful, more gentle, more positive without ever trying to change the stimulus.

As we rounded the next corner, I saw a neighbor up ahead walking to work. I didn’t want to shatter the quiet, so I just observed him as he walked into and then out of my field of vision. Once he had passed out of my sight, a small sedan came zipping down the street – going well over the speed limit – a young woman behind the wheel bopping her head to her music and peering in the mirror of her visor. I felt my blood pressure rise and lamented the fact that I was too far away from her to catch her eye and send her some kind of signal that she needed to Slow Down, for God’s sake!! My jaw clenched and my hands tightened around the leashes despite the fact that we were fully half a block from the street she had just raced down. I was furious.

Oh. Yeah. I was furious. This is mindfulness.

Noticing that word furious bouncing around in my brain, coupled with my physiological responses and the urge to dispel the tension in my hands and face and chest by yelling or flipping her off was enough to stretch out that hyphen space.

Stimulus                                       –                                        Response
Was I really angry? Yes.
Why? Fear.
The sudden appearance of this fast moving car on the heels of seeing my neighbor walk along that road sent my mind racing. As soon as I saw her driving quickly down the street, seemingly not paying close attention to her surroundings, I conjured up images of a horrible accident. My mind spun off into horrible scenarios: her not being able to stop in time for the crosswalk right in front of her; not even seeing a small child or pet racing across the street to catch a ball or chase a squirrel; crashing sounds, twisted metal, glass shattering on the roadway.
Even though none of that happened, even though two blocks ahead of her was a stoplight that would surely be red this time of the morning, my conditioned response to fear of potential disaster was anger.
Well, what about next time? She clearly didn’t learn anything this time. She’ll most certainly drive that quickly down this road again and maybe next time it won’t be fine. I wish I could catch up with her and tell her to pay more attention.

I watched as my mind created stories about her – she was out after a long night of partying and had to race home before her parents noticed she was gone. She was an entitled rich kid (she was driving a fairly new Audi sedan) who only thought about herself. She was looking in her visor to put on her makeup instead of watching the road.
I nearly laughed out loud at the elaborate tales my mind created in order to sustain my anger response. This is mindfulness.
All of this happened in the space of about 90 seconds but by remaining curious and separate from my thoughts and physiological responses, I was able to move through the fear and anger and gently redirect my mind back to the walk, the flowers and the quiet and the dogs who were now wrestling with each other on the wet grass at my feet. Instead of holding on to that tightness, elaborating on that story, striding home to tell my kids about the crazy person who sped down the street and nearly killed the neighbor this morning, I took a deep breath and let my shoulders drop.
This is mindfulness.
I may still sit today with my eyes closed and clear my mind for a while in formal meditation. But even if I don’t, I am reaping the benefits of mindfulness practice by doing my best to extend it to the other parts of my life where my stimulus-response mechanism can have enormous effects on my mood and the way I interact with others. I suspect this is only one of the ripple effects the last two days will have and while it is invisible to most people, it will certainly impact how I show up in the world.
April 30, 2017/5 Comments/by kariodriscollwriter_fan60j
https://kariodriscollwriter.com/wp-content/uploads/2017/04/20172BConference2BWebsite2BImage2BUpdated.png 497 762 kariodriscollwriter_fan60j https://kariodriscollwriter.com/wp-content/uploads/2020/08/web-logo-Kari.png kariodriscollwriter_fan60j2017-04-30 16:05:002020-08-02 13:37:06Walking Meditation

Making My Way Back

Why I Can’t Be Happy About Osama’s Death