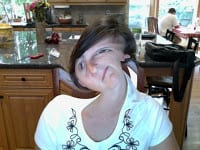 I know that I am many things to many people: mother to my daughters, daughter to my mother, sister to my siblings, wife to my dear Bubba…I could go on, but you know the drill. And, I suppose to some extent, I rely on that. I appreciate the ability to use those personality traits that fit best in any given situation in order to accomplish certain tasks, and then change when necessary. But I always assumed that I was only one person to me, and that, even if others saw vastly different sides of my personality, at least I always knew who I was at my core.
I have recently realized, however, that it is possible to really dislike who I am when I am in the company of certain people. And I thought I was done with that. Like most people, I tried out different personas in my teen years; I was a smoker with the rebellious girls, a goody-two-shoes with those who eschewed rebellion for a while, and, depending on the stage or year of high school, I could be known as prudish or outlandishly flirtatious. During those times, I often found myself feeling distinctly uncomfortable in my own skin. Asking hard questions of myself when I was all alone in the dark at night. And actively choosing to change my actions or distance myself from certain people. But as an adult, I thought I had all of that figured out. I was pretty sure I had solidified my personality like that cup of bacon grease that sits out on the counter until mid-afternoon. Not so.
There is a group of people in my life whom I love dearly and with whom I imagine I will be associated for the rest of my life. And I decided that I don’t really like who I am when I am with them. While they don’t call me on it (either because they are lovely, compassionate people or because they don’t know any different), I noticed that I am often whiny or defensive or something-not-quite-me when I hang out with them, and that makes me decidedly uncomfortable.
It turns out that when I first met this particular set of people, I put them all up on some sort of pedestal. Although, at the time, I wouldn’t have been caught dead admitting that, I was certain that they were certain I wasn’t good enough for them. And, truly, we couldn’t have been more different. But I was determined to justify my existence and show them just why they needed me in their lives. And I felt righteous about it. Sometimes. Often I felt judged and that made me angry and all the more determined to show them.
And so I established this pattern of behavior that led to me proving in subtle but varied ways that I am intelligent and witty and caring and good enough. Because if they were going to judge me, I was going to prove that I was worthy of a good verdict. And now, over a decade later, when I know they love me and I love them all for their quirks and imperfections (turns out we started out very different but are really much more alike than we all thought), I am still armoring up with my good enough suit and slathering on my 50 SPF judge-screen before meeting up with them. Once begun, it seems that the habit of being “something special” in their presence is a difficult one to break. Only the motivation is that this armor is beginning to feel more like something I’m using to conceal the authentic me than something I need for protection from these people who may or may not hurt me, but who deserve my trust. And so I have decided that it is time to feel good about who I am all the time, no matter who I am with. I know it won’t be easy, but having left a gathering of us all where I felt as though I worked harder at crafting a persona than I ever did in high school, I felt as though I didn’t know the woman I saw in the mirror and that made me sad.
June 28, 2011/6 Comments/by kariodriscollwriter_fan60j
https://kariodriscollwriter.com/wp-content/uploads/2011/06/funhouse2Bmirror.jpg 150 200 kariodriscollwriter_fan60j https://kariodriscollwriter.com/wp-content/uploads/2020/08/web-logo-Kari.png kariodriscollwriter_fan60j2011-06-28 03:28:002020-08-02 18:08:14Who Am I Today?

When A Shortcut Isn’t Worth It
6 replies