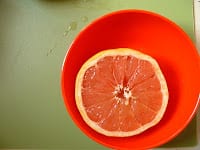 Eve discovered grapefruit about a year ago. She was helping me unpack our weekly CSA box and as she pulled two pockmarked peach-colored fruits out of the box she exclaimed, “These oranges are huge, Mom!” My brain flooded.

At first, I was astonished to realize that she was eleven years old and had never eaten (or seen) a grapefruit. I had a moment of shame before my own memories of grapefruit rushed in to wash it away.
My mom standing at the kitchen counter, small curved-blade knife in hand, cutting in to each segment of a halved grapefruit to release it from the thick casing separating it from its neighbor. This knife was created specially for this purpose, down in to the segment she plunged it and with a curve of her wrist, she expertly pivoted it in a teardrop shape before lifting the blade and moving on to the next segment, turning the fruit slightly like the minute hand on a clock so that her hand was always in the same spot. She would place each half-grapefruit in a shallow bowl, dust the tops with sugar and hand them to us on Saturday mornings. I hated it. The bitterness assaulted my mouth and made it water uncontrollably until I thought I’d drool. The sickly-sweet sugar sitting on top of the bitter flavor made me shudder. I soldiered on, seated next to my father who ate his with the kind of pleasure generally reserved for things related to cars and soccer. He ate quickly, sometimes groaning with pleasure, and then grabbed the fruit in his freckled hand and squeezed it over his spoon to catch every drop of the juice. Squeezed it over and over again until it looked like a deflated football, the segment casings glistening white like the skeleton of the fruit. It was his favorite weekend breakfast. I would eat as much as I could and hope for a distraction as I tossed the rest so I wouldn’t get busted for wasting food.
I had to use these grapefruits. And I wanted to take this opportunity to introduce Eve to something new. I remembered seeing something on a cooking show about sprinkling brown sugar on the top of a grapefruit half and putting it under the broiler for a few minutes to caramelize it. Eve ate both halves and asked if I would do the other one for her, too. I considered for a moment showing her my father’s trick for getting the juice, but using my hands in the same way he had used his was too painful to consider. Instead I described how to get the juice out. She squeezed it into her bowl to mix with some of the brown sugar bits and asked for a straw.
In the last few weeks I have rediscovered grapefruit. This week two enormous Texas Ruby Reds showed up in our CSA box and Eve was out of town with her classmates for four days. I used a small paring knife to free the flesh of the grapefruit and stuck it under the broiler with some brown sugar. As I ate the segments, warm and crunchy on top with brown sugar, cool at the core, I lamented my technique and considered buying a grapefruit knife. Too much flesh left behind clinging to the skin. I didn’t cut closely enough in my effort to avoid the bitterness of the pulp.
When I had eaten every last segment I lifted the fruit and squeezed the juice into my spoon, noting how my hands have freckled and aged over the years and look a little like his did. Tasting the bittersweet, sitting in the quiet, I shared breakfast with Dad.
January 16, 2012/9 Comments/by kariodriscollwriter_fan60j
https://kariodriscollwriter.com/wp-content/uploads/2012/01/grapefruit.jpg 150 200 kariodriscollwriter_fan60j https://kariodriscollwriter.com/wp-content/uploads/2020/08/web-logo-Kari.png kariodriscollwriter_fan60j2012-01-16 18:42:002020-08-02 18:01:47Food and Memory 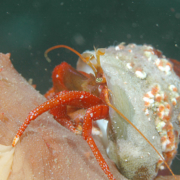 The Problem With Compartmentalizing

Learning All the Time
9 replies