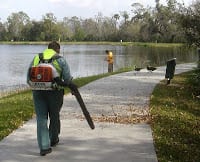 I figured out today that leaf-blowers are responsible for a great deal of commerce in the United States. I know that seems absurd, but think about it.

Everywhere I go there are people with enormous backpacks full of fuel strapped to their backs and gigantic vacuum-pipes in their hands, blowing dust and leaves and grass clippings around. Their co-workers are raking, mowing, edging, pruning, generally creating more stuff to be displaced by these loud, intrusive machines.

Let’s first consider the gear that goes along with the leaf blower itself.
$$- The person running the damn thing has to wear some sort of ear-protection so as not to lose their eardrums while they are working.
$$ They must also purchase gloves to wear lest they burn their hands on the hot machine
$$ They must buy gasoline to power the obnoxious machine.

Then let’s consider what happens to the stuff that gets blown around. An awful lot of it lands on the cars nearby – whether they are parked in lots around the area or simply stopped at a red light or driving past the work crew.
$$ – frequent car washes needed to get the pollen and dust removed from one’s car
$$ – allergy medication for those of us whose bodies wholeheartedly reject the crap being blown all around us – eye drops, seasonal allergy relief, acupuncture, allergy shots, you name it, we’re buying it.

Next, please consider what happens when they remove the leaves from the places where the trees dropped them.
$$ – the natural mulch and weed suppression that is provided by the leaves is gone. Necessitating hiring more workers to come by periodically and pull the weeds or spray toxic pesticides on them.
$$ – medications to combat the negative effects of the toxic pesticides
$$ – protective gear for the workers applying the toxic pesticides
$$ – the nutrients that would be provided to the soil if the leaves were allowed to break down there are no longer available, necessitating the purchase of fertilizers and the hiring of workers to apply said fertilizers.

These workers are all working longer hours than they would if the leaves were left to do their jobs, so they contribute further to the local economy by purchasing lunch in area restaurants and supermarkets.
These workers are doing less manual labor than they would if they simply raked the leaves from the sidewalks onto the beds where they could decompose. This could lead to one of two outcomes
$$ – higher insurance premiums to care for workers that are affected by pesticides and exposure to the exorbitant decibel level of the leaf-blower while not staying physically in-shape, or
$$ – the purchase of gym memberships or sports equipment by said workers in an effort to keep them healthy in other ways.

I am certain that this rudimentary musing has overlooked many other aspects of the leaf-blower economy, but in the ten minutes I contemplated the notion, the fact that I was able to come up with this list of things is mind-boggling.

So, even though it will probably get me labeled as a Communist and might possibly cause the further collapse of the entire Western economical model, I am advocating that these damn leaf-blowers be eradicated from the face of the planet.

Sweeping Without a Broom

The Best Parenting Advice You Will Ever Get, Teen Edition