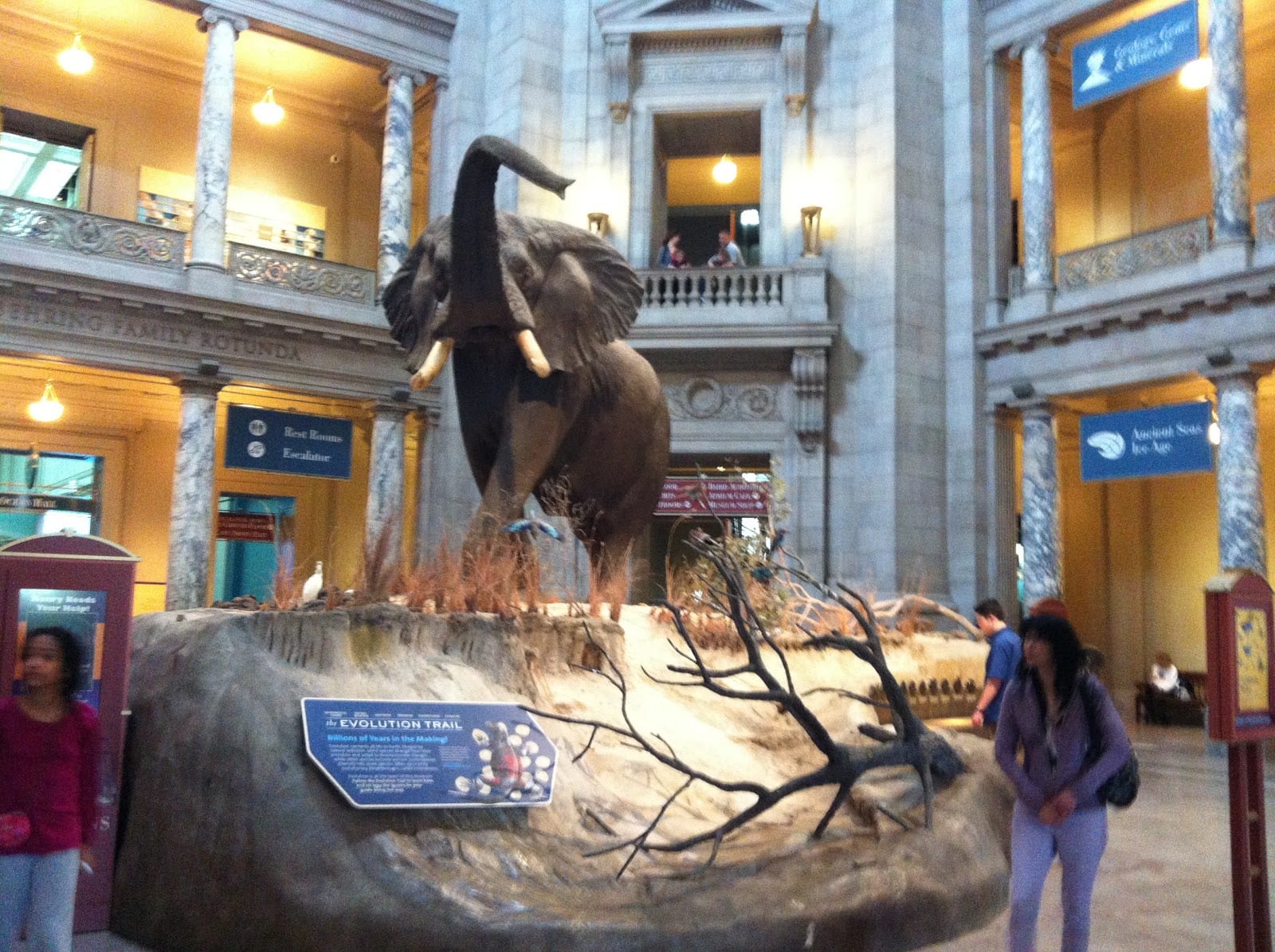 I have decided that traditional museums are lost on children. I know there are “children’s” museums in every major city in the US, but I’m talking about the natural history museums with dinosaur bones and things that school children are herded to every year, lined up like pearls on a string, and ushered from room to quiet room while some adult desperately tries to engage their attention and keep them from swinging on the velvet ropes.

Two weeks ago, Eve and I were in Washington, DC with a dozen or so of her classmates for a Close Up Washington tour. [I couldn’t have loved this tour company more – if you haven’t heard of them, check it out. What a fantastic organization!] The kids had a pretty tightly packed schedule but since they were with Close Up teachers, I was free to peel off and do my own thing and catch up with them later.

Now, I’m certain that I visited my share of museums as a kid and what I really remember about them was being bored and restless.  The idea of a field trip was almost always better than the trip itself and I know for a fact that the part I enjoyed the most was the school bus ride with all of my friends to and from our destination.

As an adult, though, heading into the Smithsonian Natural History Museum was fan-freaking-tastic. There was a life-size elephant in the lobby. This guy stared out at me from his perch, daring me to guess what he was and read all about him. 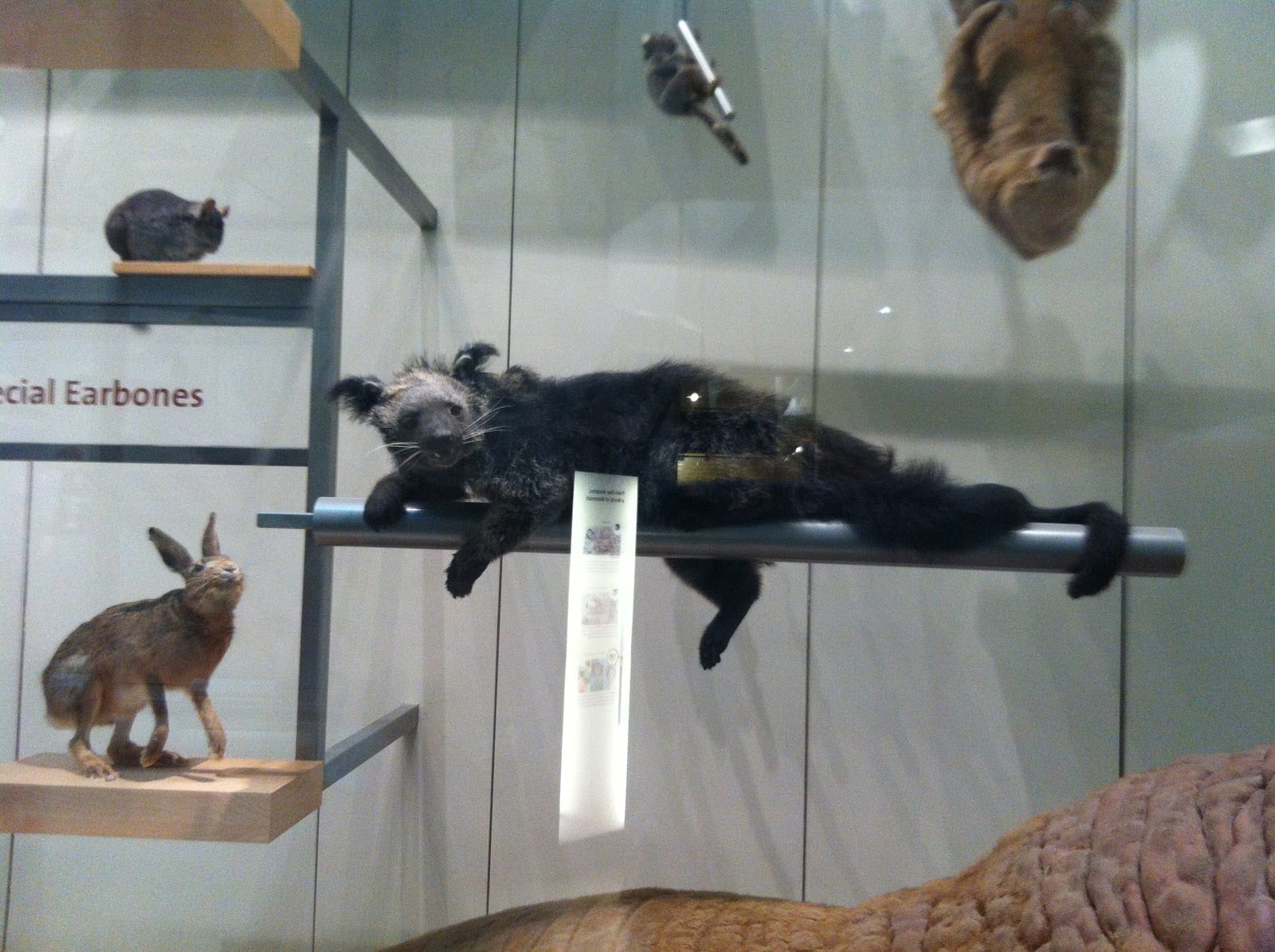 The school children around me came in two sizes:
[By the way, it may be the paranoid traveler in me, but doesn’t writing your child’s name – or having it stitched – on their personal belongings in plain sight make it easier for a freaky pedophile to coax your child over to them in a public area where they might be with a large group and, thus, not as closely supervised as you might think? Just an observation…]
I on the other hand, walked slowly but with purpose from exhibit to exhibit, reading plaques and shaking my head in wonder. I could have spent a week inside learning about the different species of bats and gaping at the Hope Diamond, standing in front of the hologram wall designed to show the structure of a crystal and marveling at the knobby skin on an egret’s toes.  The children swirled around me like waves, moving too quickly to absorb much of anything and eager for lunch.
Last week Bubba found himself in Germany on business and, with a couple of hours to kill, he decided to head to the Natural History Museum in Frankfurt. He texted me this photo 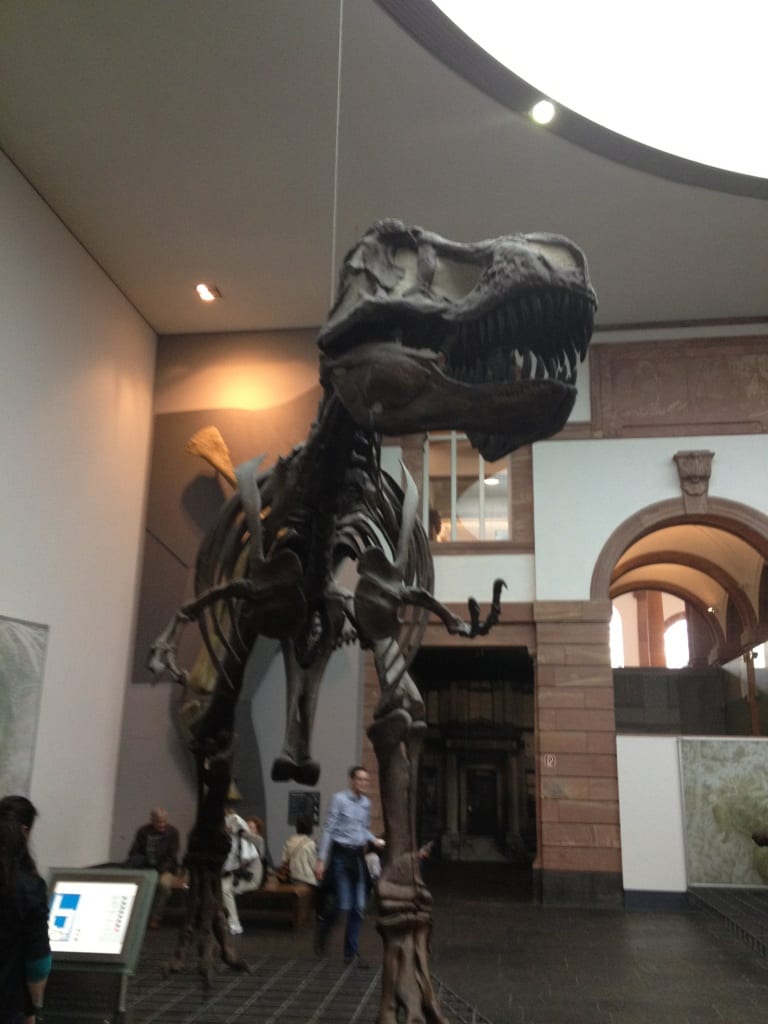 I had one of those moments where I had to remind myself to breathe. And it was then that I realized museums like this are completely lost on children.
You see, up until a certain age, most children live in their own imaginations. Everything seems wondrous and amazing for many, many years. The first time a kid visits the beach, the waves seem magical. You can totally trick a kid into thinking that quarters can be extracted from their ears. Kids will believe almost anything because they haven’t been taught that most of the stuff they want to see and do and have are impossible. And so visiting a museum and seeing something like a T. Rex skeleton is cool, but it isn’t hard for them to imagine that something like that could (and maybe still does) wander around crushing things somewhere on the planet.
As a pre-teen and teenager, kids have many other things on their minds like music and boyfriends/girlfriends, how to convince their parents they need a cell phone with unlimited text, etc.  They have no use for museums except as a way to get out of their classroom and socialize with friends on the bus.
As an adult, though, I have spent many, many years in the Realm of Things Possible and Doable. I am concerned, on a minute-by-minute basis, with what is necessary (food, sleep, walking the dog enough to avoid accidents in the house, laundry, getting children to sporting practices and events, paying bills) and weighing against that, what is actually possible in any given day.  I am not given to fantasy except as it relates to these things (having my insurance company suddenly call up and say, for example, “You know what? Your deductible is too high and we have noticed that it’s only May 1 and you have already had some very legitimate reasons to visit the doctor this year and these little nickel-and-dime lab fees and tests and follow up visits are killing you. Let us pick the rest of it up this year, okay?”).
So to walk in to a museum and see a stuffed African elephant is jolting. It stops me in my mental tracks and reminds me that there are wondrous things that exist outside of my ability to think about. Looking at that photo from Bubba made me recall that there was once something this enormous, this phenomenal, this astonishing that roamed the Earth. It gave me pause and opened the doorway to a place of speculation and wonder where I have not spent much time in the last four decades.  I was properly awed when I made my way through the Smithsonian museum and I believe I was in the minority.
I will be heading to museums more from now on, but I won’t be taking my children. I love them and I do hope that one day they, too, will discover how great museums are, but I have no desire to drag them in and spend precious time and energy convincing them or cajoling them into enjoying themselves. Nope, instead I will give myself the gift of going alone and remembering my imagination.  Because I need that more than those dang schoolkids. And I appreciate it more, too.
May 1, 2013/4 Comments/by kariodriscollwriter_fan60j
https://kariodriscollwriter.com/wp-content/uploads/2013/05/elephant.jpg 1195 1600 kariodriscollwriter_fan60j https://kariodriscollwriter.com/wp-content/uploads/2020/08/web-logo-Kari.png kariodriscollwriter_fan60j2013-05-01 18:41:002020-08-02 17:47:42Museum Revelations

Consequences of Breaking My Own Rules