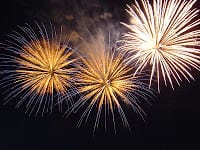 Since coming back home from my in-laws’ as the holiday season winds down, I’ve been feeling a little down. The stress of packing fourteen people (seven adults and seven children) into a small space for a week with dreary, cold weather and lots of opinions on parenting and cooking and politics and everything in-between has caught up with me. We had a lovely time with these amazing individuals, but after a few days of rubbing up against each other, things get a little chafed and it was time to head for home. For a person like me who tends to be very introspective, the tendency to self-judge and second guess becomes overwhelming. Unfortunately, we came home to a very sick hamster (Lola’s) who was valiantly fighting off a bacterial infection and lost the battle yesterday. We are all very sad to lose this adorable, feisty member of the family and, as grief comes in waves, at any time of the day one of us can be found in tears over her loss.

As the sun rose today and I contemplated the gathering we will have tomorrow to welcome the new year, Bubba recognized my mood and strongly encouraged me to head to yoga. I did, and struggled a bit to stay “on my mat” in mind and body during the 90 minutes, but now, 90 minutes after class, I’m feeling somewhat more centered. I gathered the girls at the kitchen table to review our year a bit and was astonished to discover how quickly we amassed a pretty impressive list of things we have done in the past twelve months. In no particular order, here goes:
Eve: successfully learned to manage her 6th grade schedule
survived (and thrived at) her first sleepaway camp
had her first official babysitting job
cooked an entire dinner for the family (with significant help from Lola)
Turned 12
Broke her first bone
Played on her first basketball team and loved it
Did the dinner dishes for an entire month by herself
Went on her first class camping trip
Learned to sail with her classmates
Lola: started skateboarding lessons
survived (and thrived at) her first sleepaway camp
played her first season of lacrosse (and kicked butt)
did all of the laundry for an entire month by herself
cooked an entire dinner for the family with her sister
started a recycling education project in her classroom
lost her last baby tooth
got braces
Both girls: chicken-sat for the neighbors
went to the San Diego Zoo for the first time
visited Joshua Tree National Park for the first time (me, too!)
took paddleboarding lessons (me, too!)
steered a boat in the Pacific Ocean
saw a stingray off the coast of Maui (me, too!)
learned to play beach volleyball in Santa Barbara
kayaked in Lake Wenatchee
I managed to get published on line in BuddhaChick Magazine, created a relationship with BlogHer that increased my readership, took approximately 60 yoga classes, learned to make good gluten-free baguettes, took my first trip with Bubba away from the kids, turned 40 and saw U2 in concert. Bubba’s company grew, he participated in his first camp singalong, he traveled to some new places and made new friends and became more beloved to each and every one of us.
Looking over the list we managed to put together in a few short minutes began restoring my faith in hope. I had Lola grab a fresh sheet of paper so we could scratch out some predictions for 2012 and we were quickly laughing and fantasizing. I’ve decided to leave both lists out so we can add to them throughout the day as inspiration or memory arises. Maybe it was the yoga. Maybe it was finally settling back in at home. Maybe I’m feeling better because the sadness is running its course. I don’t know, but I am happy that the simple act of looking back on our year for a few moments had such a profound effect on my mood.
I am struck by the notion that most of the things on this list were not earth-shattering. Most of them were not things we specifically set out to do. They were simply things that happened in the course of our lives, moving along through space and time the best way we know how, loving each other and sticking to the values we hold most dear. I hope that a year from now I can look back again and be amazed at the adventures each of us have had, together and individually.
Here’s to 2012 and all it brings.
December 31, 2011/6 Comments/by kariodriscollwriter_fan60j
https://kariodriscollwriter.com/wp-content/uploads/2011/12/new2Byear.jpg 150 200 kariodriscollwriter_fan60j https://kariodriscollwriter.com/wp-content/uploads/2020/08/web-logo-Kari.png kariodriscollwriter_fan60j2011-12-31 20:31:002020-08-02 18:02:44Looking Back on the Year

When Mothering is in Your Bones
6 replies